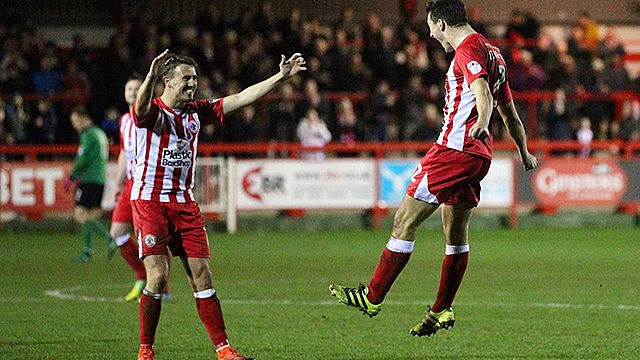 John Coleman praised double goal heroes Sean McConville and Matty Pearson – and expects both of them to be on target more between now and the end of the season.

Winger McConville scored two spectacular goals in the 5-0 defeat of Leyton Orient on Tuesday to take it to five for the season.

Defender Pearson also celebrated a brace to take his tally to eight goals for the campaign – five in the last six games – as Stanley look ahead to the trip to Yeovil on Saturday.

Coleman admitted that while Pearson’s goals are a welcome boost, McConville’s were needed.

The 28-year-old, despite a large number of assists this season, had scored once in 35 games prior to Tuesday.

“Sean, by his own admission, knows he needs to add more goals to his repertoire,” said Coleman.

“Sean has been very consistent this season but he isn’t getting the chances he got last season. He has largely been a provider and we have been encouraging him to get in the box to get more chances. Ironically on Tuesday both his goals were from outside the box, both were fantastic goals and I am sure he will score more between now and the end of the season.

“For Matty, it’s very rare you get a full back going into every game expecting to score. We expect him to have double figures by the end of the season but he should have that already as he has hit the woodwork around four times and has had four or five golden chances which he is disappointed he hasn’t taken.

“Matty is brimming with confidence and it’s great to watch a player like that who is on top of their game. Matty on the pitch is like a madman and he is like that in training every day, a few of our players are.

“It’s been great to watch Matty develop and he goes into every game expecting to get on the end of  a set piece. He is a great lad with a great career ahead of him.

“We are getting goals from defence, the strikers are scoring and now we need the midfielders to chip in.