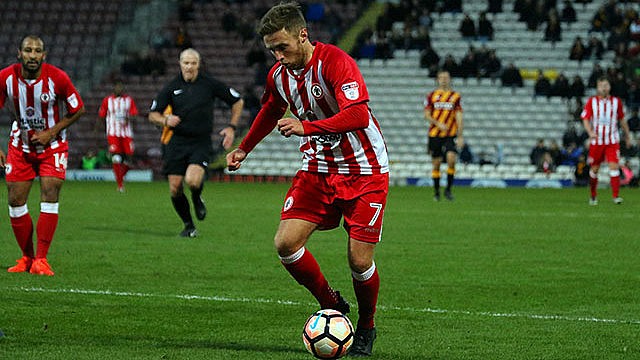 Stanley wideman Jordan Clark wants his team mates to take the best bits from Tuesday’s draw with Wycombe to help them beat Barnet at the weekend.

The Reds led the Chairboys 1-0 after a dominant first half but needed a Matty Pearson equaliser in the second half to draw 2-2.

Now they’re preparing to host the Bees and Clark is keen to use their frustrations to secure maximum points.

“We’re disappointed after Tuesday because we felt we should have won,” he said. “There were individual errors, including myself from the throw in, and it was a tough one to take. We have to take the positives, we didn’t lose, and take them into Saturday.

“We just switched off and were punished and it cost us two points but we’ll take responsibility for the mistakes and learn from them.”

The midweek results means John Coleman’s side remain unbeaten at the Wham Stadium in 2017 and that’s something Clark is keen to build on.

“Every time I’ve been here with other clubs it’s been a tough place to come,” explained the 23-year-old. “At the start of the season we were doing okay but we wanted it to be a fortress and we didn’t do that. Now to be unbeaten this year is better but we know we can still improve. This is a massive game to get the three points and start looking upwards.

“The pitch was okay on Tuesday, despite all the rain to be fair. Full credit to Buzzer the groundsman. He does a hell of a job and it was a great effort to get the game on in the week. Hopefully the weather isn’t too bad and we’ll play again this weekend and get the points.”