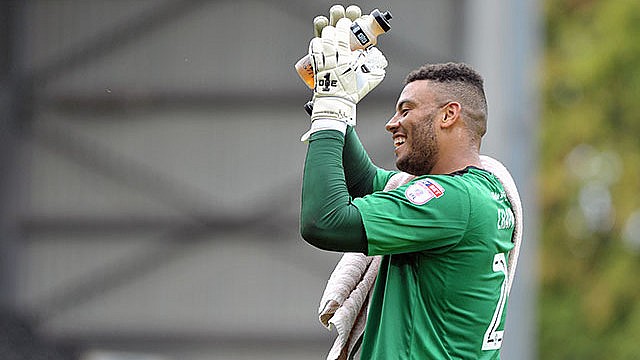 Chappy happy to be back

Aaron Chapman has enjoyed his return to the Stanley first team but knows that competition will be fierce if he’s to get more games before the end of the season.

The goalkeeper has played the last two games with Marek Rodak away on international duty and kept a clean sheet in last night’s win over Cambridge United.

With Elliot Parish also vying for the number one shirt manager John Coleman has plenty of options and Chapman acknowledges there’s a lot of competition.

“It’s a difficult situation but there are three good goalkeepers here and only one of us can play,” said Chapman. “We’ve all been working hard and whoever plays the others are behind them. It’s been good to get my chance for the last two games.

“When you’re not playing you can get down but there are three good lads competing here and we just get behind each other. You just have to make sure you’re ready when the time comes.”

Saturday’s draw with Grimsby and the victory over Cambridge, with Chapman in goal, have extended Stanley’s unbeaten run to eleven matches which is a stark contrast to their poor run before Christmas.

“It’s always nice coming into a winning team,” he smiled. “We’ve got that mentality of winning and once you’re winning even when you do something wrong it still comes right in the end.

“We don’t really want to come out and say it but there are seven games left and if we win those seven games you never know where it might take us. I think we’re safe now!

“Goals change everything. In our bad run we didn’t score in nine and now everything we’re hitting seems to be going in. Our luck has changed.

“The main thing is that you don’t want the season to fizzle out. We’re playing like our season is anything but fizzled out. We’ve still got something to play for and it’s nice to still have that.

“The lads just seem to get better and better. When you’re on the pitch you see the little things that they’re doing that you may not see when you’re not on the pitch. They’re a credit to themselves and pleasure to play behind.”