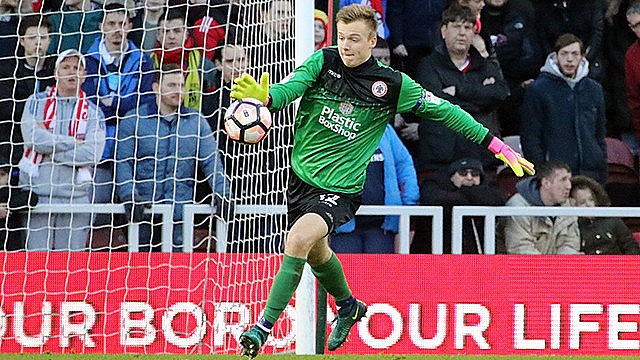 Call up for Rodak

On loan Stanley goalkeeper Marek Rodak will miss Saturday’s game with Grimsby Town after receiving an international call up.

The 20-year-old Fulham custodian is in the squad for Slovakia under 21s friendly against Czech Republic tomorrow.

Manager John Coleman is disappointed to lose Rodak, who has been an ever present since arriving from Craven Cottage in January.

“It’s a blow to lose him but an occupational hazard when you have players who are internationals,” said Coleman. “It won’t be the first time we lose a player to international duty and it certainly won’t be the last. I don’t think he’ll benefit more from going away than he would from staying here and playing another game but they’re the rules.”

Rodak has kept four clean sheets in his 14 games for the Reds so far and Coleman thinks he is going from strength to strength at the Wham Stadium.

“He’s improved with every game he’s played and he’s taken on board everything we’ve spoken to him about,” he continued. “He’s keen to learn, which for young players and particularly young goalkeepers gives them a chance.

“It means that they can eliminate mistakes that they are making and hopefully stop goals going in.

“He might give the impression that he’s quiet but he’s quite bubbly around the place. The lads have christened him Jeff and he’s taken that banter quite well. I’d say he’s come out of his shell and I think you can see that on the pitch.

“We still have Aaron Chapman and Elliot Parish here and this gives one of them a chance to stake a claim and push Marek all the way and hopefully try to dislodge him.”