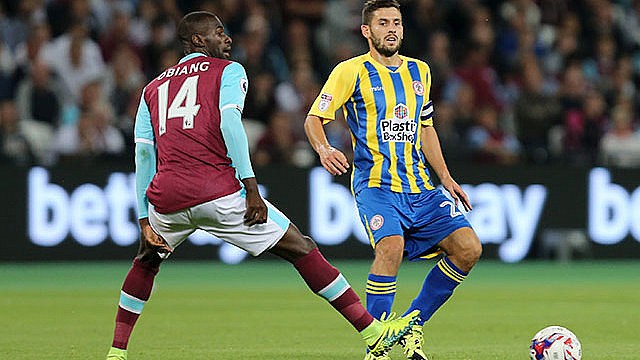 Seamus Conneely is keen for Stanley to turn on the style as they face Wycombe Wanderers at home tonight.

The captain felt that despite drawing at league leaders Doncaster on Saturday, the Reds didn’t play as well as they can and now he knows they need to impose their style on the promotion-chasing Chairboys at the Wham Stadium tonight.

“At Doncaster, we went ahead through a great goal from Shay (McCartan) but even then I thought we seemed nervy and edgy and didn’t control the game despite being 1-0 up,” said Conneely.

“We didn’t do ourselves justice and Doncaster came back but in the end we were happy with a point. I think we showed a little bit of resilience to keep going and come back from 2-1 behind.

“And this will become a really good point if we can win our home games and that’s what we need to do now.

“Wycombe will be a tough game. They have a very effective style of play, it’s direct, they have some good players and it will be a competitive, physical game.

“They will try and make it difficult for us but it’s up to us to concentrate on our own game and stamp our own style on it.”

Wycombe enjoyed a 12 game unbeaten league run – winning eight of them –  which propelled them into the play-off picture before Christmas.

They also had a strong run in Checkatrade Trophy and only lost to Tottenham at White Hart Lane in the FA Cup fourth round in the last minute.

However, they have lost their last five league games.

“Like us, I think they have been affected by their cup runs. I think we suffered over Christmas,” continued Conneely, with Stanley losing to Middlesbrough in the FA Cup fourth round and also facing West Ham in the EFL Cup earlier in the campaign.

“Good cup runs can affect your league form and it maybe what is happening to Wycombe at the moment but that’s why football is a squad game and there is squad rotation so you can compete in several different competitions.

“It can affect you though and they will be determined to turn their league form around again but we will concentrate on ourselves and hopefully get the win.”