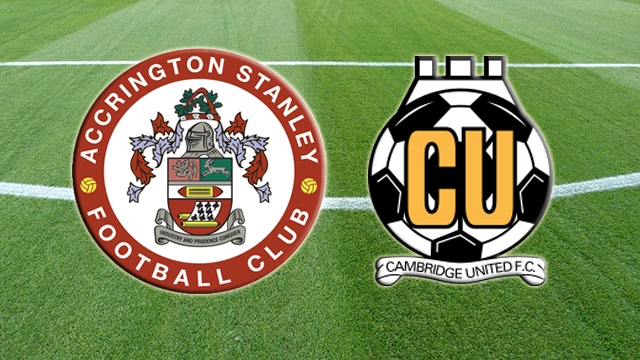 It’s back to the Wham Stadium tomorrow for Stanley for a second home game in a week.

Days after beating Colchester to make it back-to-back home wins, the Reds host Cambridge United in a rescheduled match.

There’s no rest for the Reds in February, with another fixture coming hot on the heels of Saturday’s win over Colchester.

It’s a second game in four days at the Wham Stadium as Cambridge United make the trip north.

John Coleman’s team will be targetting a third successive home win and a third game unbeaten against the U’s.

Stanley are unbeaten in their last two games, drawing at Mansfield and beating Colchester at the weekend.

They’ve won back to back home matches and haven’t lost at the Wham Stadium since December.

The Reds are 19th in League Two, four points above the relegation places.

Omar Beckles begins a three match ban after Stanley elected not to appeal his red card against Colchester.

Sean McConville’s booking in that match was his tenth of the season, meaning he misses this game and Saturday’s trip to Doncaster through suspension.

Also ruled out is Janoi Donacien, who serves the second of his two match ban for reaching ten yellows.

United were ninth in League Two last season and must have started the new campaign harbouring ambitions of more this time around.

Poor form at the start of the season meant they were briefly bottom of the table but now Shaun Derry’s men rallied to climb the table.

They now find themselves mid table and looking to embark on another run to elevate themselves higher.

A midfielder during his playing days, Shaun Derry was appointed manager of United in November 2015.

His first game was against Accrington where the Reds won 3-2.

Derry began his career at Notts County before departing for spells with Sheffield United, Portsmouth, Nottingham Forest and Leeds.

He also had two stints with Crystal Palace, winning promotion to the Premier League in 2004. He repeated the trick with Queens Park Rangers before hanging up his boots following a loan spell at Millwall.