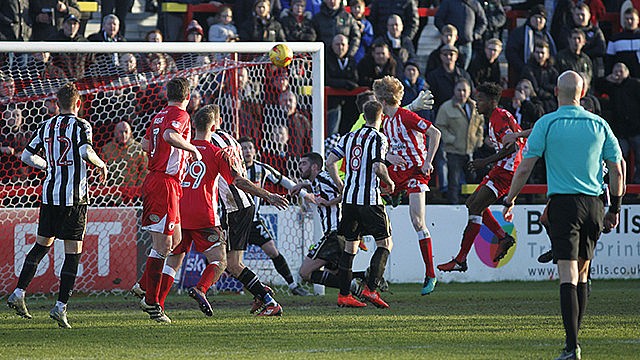 Rodgers: keep it up!

Defender Harvey Rodgers wants Stanley to build on the weekend win over Notts County and show everyone the Reds are capable of going on a run.

The Hull loanee was a scorer as John Coleman’s side saw off the Magpies to win in the league for the first time at the Wham Stadium since October.

And the Yorkshireman feels it has eased a little of the pressure on the players. 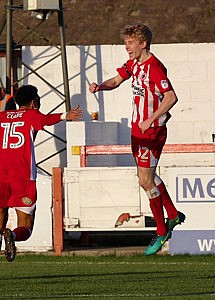 “At the beginning of the Notts County game we were nervous and I think you could see it,” he explained. “We should take confidence from winning and hopefully there won’t be those nerves on Saturday.

“We’ve won here and there this season and thought the wins might be the start of a run but this one needs to be the start. We have to get points on the board and keep climbing the table.

“I think we play better against big teams and those high up in the league. We’ll need to do that this weekend against Portsmouth who are a side who are up there.”

Rodgers’ header on the stroke of half time was his first senior goal and a moment he won’t forget in a hurry – even if his memory of the build up is somewhat blurry.

“It was a great day for me and a great day for the team,” he said. “I’d said after Middlesbrough that Notts County was a massive game and the main thing was to win the game and take the three points. It gives us a bit of breathing space. I think we’re four points from the bottom two now with a couple of games in hand so it’s a real boost.

“I can’t remember much about the goal to be honest. I saw the ball coming in, I lost my man and it was a simple header into the goal. I normally go back post but this time I went front post and managed to get on the end of it.

“A clean sheet is huge. I think we’ve defended well in the last few weeks, at Middlesbrough and against Carlisle but not managed to keep one so it’s great for the defenders. We worked really hard for it.

“We’re working for each other. It doesn’t matter who plays or where they play. We want to win games. That’s it.”