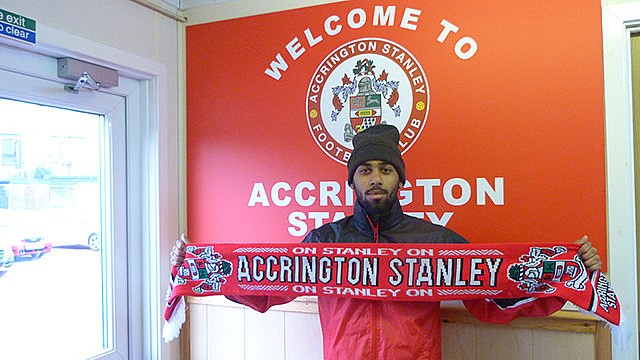 Stanley have completed the signing of Portugal under 19 international winger Erico Sousa on a deal until the end of the season.

The 21-year-old has just completed a spell playing in the Slovenian top flight and had been training with the Reds.

He came through the ranks with Barnsley and so is no stranger to the English game and can’t wait to get started at the Wham Stadium.

“Obviously I’m delighted to be here and back playing again,” said Sousa. “I just have to get my head down and hopefully get onto the pitch and show what I have.

“I’ve pretty much played in England for all of my career so it’s not new to me. Being in Slovenia was a different type of football but it’s still football. It was different in Slovenia, the language was a bit of a struggle at the start but then I started getting to learn a few words. The football is still eleven v eleven so you get used to the game.

“It’ll be easier to settle back here because I have family and friends around. That’ll make it easier mentally but I’ll still be working hard to establish myself.

“It’s good to finally get the chance to make my league debut. Hopefully if I do the best I can I can help bring good results to the team.

“I’ve heard they like to bring the youngsters through. I just want to get my chance and hopefully I can grab it with both hands.

“I think my best position is out wide, I’m quite quick and I like to think I’ve got something in my locker skill wise but I will always work hard too. That’s the main thing. These days full backs tend to get forward which means you have to get back but you have to adapt.”

Manager John Coleman is pleased to welcome Sousa to Stanley having seen him at close quarters.

“He’s done well while he’s been with us,” he explained. “He’s lively and gives us something different. I’m pleased to have him. He’s got a lot of pace and the ability to get past people which is something we’ve perhaps been lacking. He’s a good crosser of the ball, similar to Piero Mingoia. Piero was popular here and hopefully Erico can be the same.”

Sousa will go into the squad for tomorrow’s trip to Mansfield Town subject to international clearance being received.