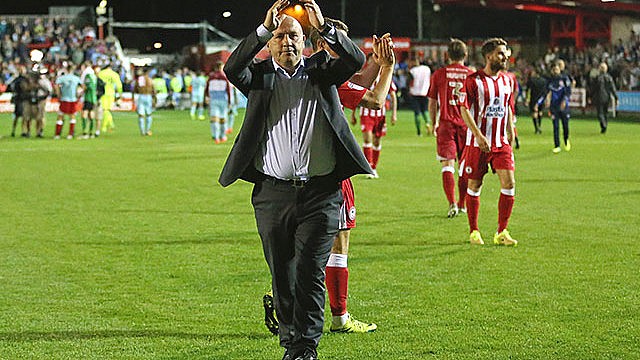 Out to silence Pompey: Coley

The Reds take on one of the promotion favourites Portsmouth, managed by former Stanley boss Paul Cook, who are looking to bounce back after three defeats in their last four league games.

Cook has called on his players, which include ex-Reds Tom Davies, Kal Naismith, Gary Roberts and Amine Linganzi in their squad and Leam Richardson and Andy Procter on their staff, to stay positive as they look to move up from seventh spot.

And Coleman knows the huge 17,000-strong support Pompey get at home can make a difference – especially as Cook’s side haven’t scored in two games.

“We know they have got good players and they are not going to keep firing blanks,” said Coleman, whose side are looking to build on their victory over Notts County last week.

“We have to hope we can stop them and they find their feet somewhere else. We know a lot about them and their players but what we have to do is concentrate on ourselves.

“The last two times we have come up against Paul Cook’s Portsmouth away we have drawn or lost and we haven’t scored and something has got to change.

“They have big resources which most League Two clubs will be envious of, shown by signing someone like Eoin Doyle from a Championship club on loan, but we feel the loan players we have added have boosted our squad at it is just 11 v 11 tomorrow.

“They get crowds of 17,000 and opposition players can get a buzz out of playing in front of a big crowd and it can bring out the best of them. To have 17,000 fans cheering you on can make you into an unstoppable force.

“Our aim is to make the crowd as disgruntled as possible as quickly as possible. They are a big club, not so long out of the top flight, and they will feel they deserve to get back to where they were.

“But at the moment they are in League Two for a reason, like we are.”