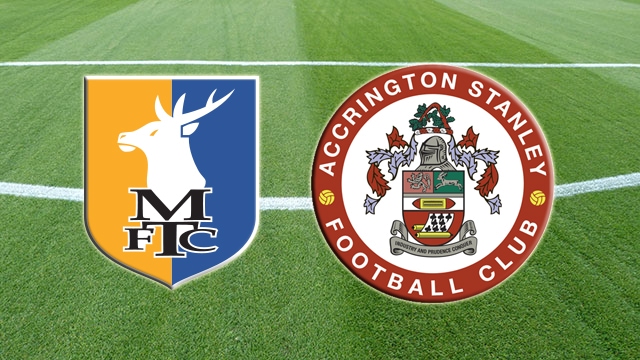 The Reds are back on the road tomorrow looking to put weekend defeat behind them.

John Coleman’s side travel to the One Call Stadium to take on in form Mansfield Town.

After a long trip to Portsmouth it’s a midweek trip of a shorter distance but just as big an importance for the Reds.

They’re looking to put their inconsistency behind them and get onto a good run in League Two.

After the stop start nature of recent results John Coleman’s side will be keen to bank another invaluable three points.

Stanley weren’t able to string together back to back wins last time out with a 2-0 defeat at Portsmouth.

Away form has taken a dip of late, with goals proving hard to come by on the road.

The Reds are 21st in League Two, three points clear of the bottom two.

Portuguese winger Erico Sousa could be involved for the first time since signing a deal until the end of the season if he receives international clearance in time.

Regulars Matty Pearson and Scott Brown are both back into contention after serving their respective suspensions.

But Terry Gornell will miss out after picking up an ankle injury last week.

Mansfield have thrust themselves into promotion contention with a run of fine form.

The Stags haven’t lost a league game in 2017 and sit seventh in the League Two table.

They’re ahead of eighth placed Wycombe on goal difference and six points from the top three.

Evans put pen-to-paper on a two-and-half-year deal at One Call Stadium and boasts an outstanding track record of nine promotions in a career spanning over two decades.

After a playing  career cut short by injury he began his management career, making his name by bringing Boston United to the Football League and then leading Crawley Town to two promotions in five season.

Further success followed when he took Rotherham to the Championship before taking the reins at Leeds United which was his last job before arriving in Mansfield.

This match is all ticket, with no sales on the night.