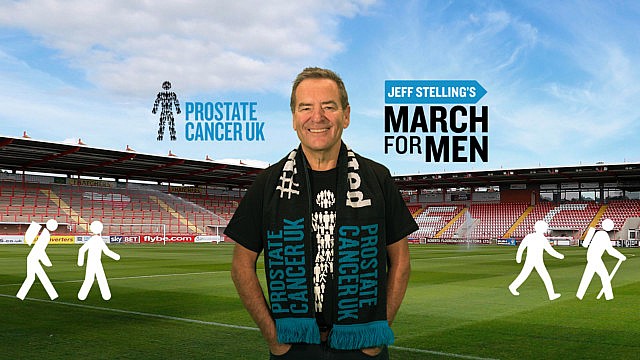 Now, in 2017, Jeff is back. And it’s bigger and better than ever. He’s walking 15 marathons in 15 days visiting over 40 football clubs starting at St James Park, Exeter City. On Friday 9 June he will kick off from Oldham Athletic’s Boundary Park via Spotland on the way to completing Day 8 of this March for Men at Accy. By the time he reaches St James’ Park on 16 June 2017 he will have walked almost 400 miles.

Last year, when Jeff and his mate Russ Green (Hartlepool United’s CEO at the time), walked 10 marathons in 10 days, they visited 32 football clubs clocking up 262 miles. He was joined by over 400 people across the event who all had a story to tell as to why they stood shoulder to shoulder with Jeff raising money to beat a disease killing one man every hour in the UK.

Join Jeff on his March for Men: www.marchformen.org/jeffsmarch

“After the agony and ecstasy of the walk last year, particularly the agony so many people have been in touch with me, people with stories of their battle against prostate cancer…It’s just inspirational and it’s inspired me to do something once again.” said Soccer Saturday’s front man who will finish Day 8 at the Wham Stadium on Friday 9 June 2017.

While Jeff’s feet may be in agony already just thinking about walking almost 400 miles across 15 days, his motivation is clear. The people he met have inspired him to go much further than in 2016, and reach parts of the country last year we didn’t reach.

“There were too many stories to tell in truth. Every single one was inspirational. I’d be walking alongside people and saying ‘why are you here?’ And the person I’m talking to might say ‘I’ve been given six months to live’. They were spending their precious moments walking to support the battle against prostate cancer, so that other people in the future didn’t suffer in the way they were feeling right then. It was just inspiring individuals from start to finish.” said the Sky Sports broadcasting legend.

And Jeff was joined not only by his mate Russ Green, and an army of fundraising marchers joining the fight for men everywhere, there were also many famous faces from the world of sport who came out to help Jeff make it to Wembley including his Soccer Saturday team, Alan McInally, Ray Wilkins, Chris Kamara, Trevor Sinclair and Alistair Campbell.

But it was three days in after a difficult second leg from York to Leeds when a celebrity face was needed to give everyone a boost. Luckily for Jeff and the walkers the godfather of marathon walking made a surprise visit to join Jeff on the second half of the journey to Glanford Park, the home of Scunthorpe United.

“Ian Botham turned up on a particularly, dreary, cold miserable day and lifted everyone’s spirits. We’re hoping all the people that came with us last year will come with us again – and more. Because there’s nothing like a chat with a celebrity to raise the spirits when you know you’ve got 26 miles ahead of you.” said Jeff who aims to complete his 400 mile march on Friday 16 June finishing at St James’ Park, the home of Newcastle United.

Jeff Stelling, Russ Green and over 400 marchers raised £420,000 in 2016, and helped raise the problem of prostate cancer to millions of people across the UK.

If you walked last year or you are new to his 2017 challenge sign up for Day 8 of Jeff Stelling’s March for Men and help stop prostate cancer being a killer.

Join Jeff on his March for Men www.menunitedmarch.org/jeffsmarch