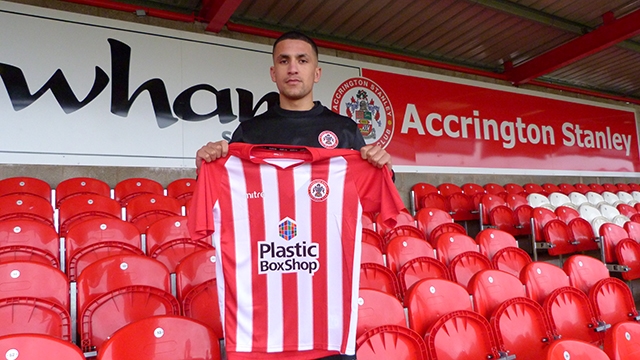 Stanley new boy Noor Husin is back at the Wham Stadium and looking to make an impact having been given another chance to impress.

The 19-year-old has arrived on a season long loan from Premier League side Crystal Palace and could make his debut against Notts County this weekend.

The Afghanistan-born midfielder isn’t in unfamiliar surroundings though, having had a short trial spell with the Reds last year.

“I came here towards the end of last season to train for a few days after leaving Reading,” he explained. “I trained with the boys so obviously I knew a bit about the place and how good a club it is.

“I thought I did pretty well but then I got the chance to sign for Palace in the summer and was with them for six months. I needed to get out for the second half of the season and the gaffer here knew about me, spoke to me and the deal went through on deadline day.

“The gaffer had said he’d wanted to sign me at the end of last season but it didn’t end up happening. Being here before for a couple of days will help. I know the place and a few faces and I’m looking forward to getting started.

“It shows that the manager has faith in me to bring me in after seeing me last season. I’d like to repay that faith.”

Husin is highly-rated at Selhurst Park and has already been involved with the Palace first team.

Now he’s keen to get a regular run of games at Football League level.

“This is what I need at this stage of my career,” he added. “First team football at a good level will help. I’ve been on the bench for the first team at Palace and train with them regularly but I think this will take my game to the next level and mature me.”