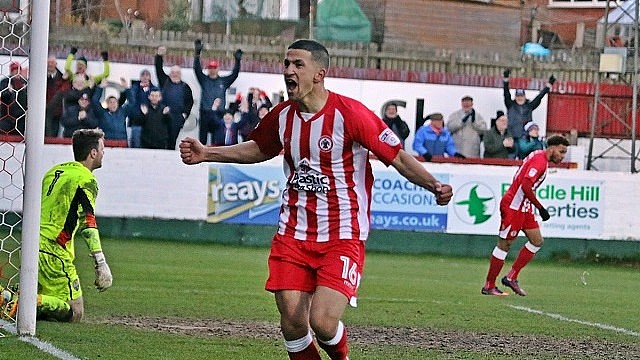 Stanley new boy Noor Husin admits he couldn’t have written the script for his debut any better.

The 19-year-old only signed for the Reds on Tuesday from Crystal Palace and, within 13 minutes of making his league debut as a substitute, he had put the ball in the back of the net on 80 minutes.

It was a vital goal to secure three points for Stanley in their relegation clash with Notts County  as the Reds celebrated their first home league win since October and it gave them some breathing space from the bottom two.

Harvey Rodgers had put Stanley ahead on 45 minutes and Husin capitalised after Jonny Edwards broke through and keeper Adam Collin could only turn his shot into the path of the new loanee who had the easy task of firing into an empty net.

“When he (Jonny) was going through I thought he was going to square it to me but he had a shot which is fair enough and it bounced nicely for me,” said Husin, who was born in Afghanistan and came over to the UK when he was five-years-old.

“I took a gamble and it paid off and I am over the moon.  It was a difficult one because the ball was bouncing so I just had to keep my eye on it and put it in the net and it was amazing feeling.

“The game could have gone either way but that second goal gave us the cushion we needed to see the game through and we kept a clean sheet and so it was good all-round.

“The most important thing was the three points and now we have to push on.”

Husin is already looking ahead to next week’s clash at promotion-chasing Portsmouth.

“With the season Accrington had  last year it’s surprising to see us down there but we are a good team.

“You can see that and we shouldn’t be down there but we have to look to climb up the table rather than looking down and get the wins and push on.

“Portsmouth are a team fighting for promotion – that’s what we want to do – so we will go down there and aim to get a result.”

And he admits his first league goal will help his confidence.

“It will definitely help me settle in, it’s the best feeling scoring a goal and it will do me the world of good. Hopefully I can build on that and get a few more before the end of the season.