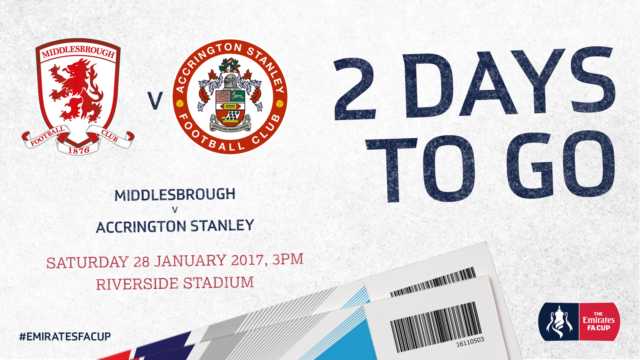 We’re out to beat Boro: Coley

John Coleman will be going to Middlesbrough on Saturday in the Emirates FA Cup to win – as he says he doesn’t know any other way of playing.

Stanley are looking to be make the fifth round for the first time in their history by overcoming the Premier League side at the Riverside Stadium.

While Coleman knows a draw will be more financially beneficial to the club, he says it’s all about winning at the first time of asking.

“I will be going to win, it’s the only way I know,” said the Reds boss. “I have seen teams in the past approach the game not to get beat and it has paid off – it paid off handsomely for Plymouth at Liverpool recently.

“A draw would be good financially for the club as there is the revenue from a replay and you will probably be on television.

“But it’s not in my nature to set up a team like that. I believe when you are going out to play a game of football, whether it’s a friendly or against a Premier League team, you should go out to try and win.”

Coleman admits it’s tricky to prepare for Saturday due to not knowing what kind of team Aitor Karanka will put out.

“It’s hard as, in League Two, you generally know who will play, the impact X, Y or Z will have, how to nullify that threat and identifying the weaknesses you can exploit in the opposition.

“For Middlesbrough, or any Premier League team in the cups, you cannot second guess their team so all we can do is prepare for a system or style of play rather than personnel.

“I looked at their bench from their last game and their seven on the bench are probably interchangeable with the 11 on the pitch – playing their so-called ‘fringe’ players doesn’t overly weaken their team.

“If I changed seven or eight players it would severely weaken my team.

“From Middlesbrough’s point of view, and any team at the lower end of the Premier League, it’s a realistic chance to win a trophy. I am sure the Middlesbrough fans would love to go to Wembley.