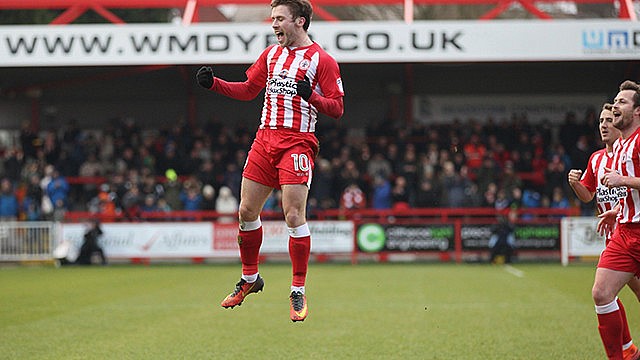 Shay’s out for more Boro success

Shay McCartan fancies Stanley’s chances against Premier League Middlesbrough after their cup successes of this season.

The Reds have beaten Premier League Burnley, seen off high-flying League One side Bradford in both the EFL Cup and the Emirates FA Cup and ran West Ham close.

Accrington have also already got one over Boro at the Riverside Stadium – they beat them in 2013 in the Capital One Cup with goals from Marcus Carver and Piero Mingoia.

So McCartan admits they travel to the north east in the Emirates FA Cup Fourth Round with plenty of belief on Saturday.

“We enjoyed going to Middlesbrough in 2013,” said McCartan, the only player still at the club who featured in that game. “They were a Championship side then and it was great to win.

“I can remember the atmosphere most, I remember there wasn’t the biggest crowd but we went over to clap the Accrington fans in the corner at the end of the game and they were making a lot of noise.

“Piero scored in the 81st minute and it was a great feeling.”

While that’s high up on McCartan’s highlights, he says beating Premier League neighbours Burnley in the EFL Cup in extra-time in August is his favourite cup memory.

“It was just the atmosphere, it was a local derby, they ground was packed, it was at home and we won in the final minutes of extra time – it was everything about that game.

“But we will enjoy going to Middlesbrough and playing in one of the best stadiums, it’s only a couple of hours up the road, it’s the FA Cup fourth round and there should be 20,000 there. It should be a great game and, for us, it’s a free hit as not many people will expect us to win.

“We have to go there with no fear. It is a big ask but we went to West Ham and they needed a goal in the 92nd minute from the quality of Dimitri Payet to beat us.

“We will take it in our stride and try and enjoy every moment.”

McCartan admits scoring his first goal of the season against Carlisle at the weekend – a 20 yard free kick – was a boost to his confidence.

“It’s a monkey off my back as I have hit the post or the keepers have made good saves so for it to finally go in is a relief.

“I have taken a few free kicks and they have gone over but sometimes they go in and this was a great strike. Hopefully this is the first of many now.”

And, with Sean McConville winning goal of the third round, McCartan wouldn’t mind making a similar impact in round four.

“That would be nice,” he smiled.