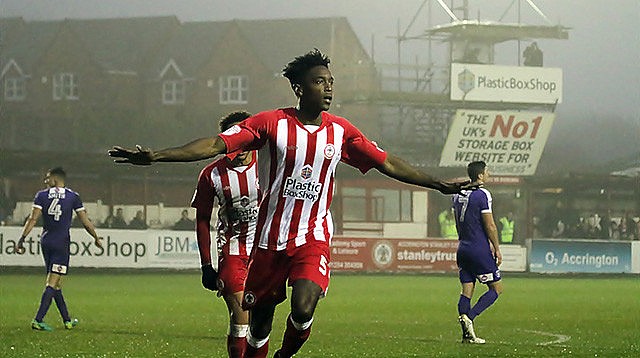 Omar on that vital goal

The winning goal scored by Omar Beckles yesterday may have been worth £67,500 to Accrington Stanley but for him it was a personal milestone.

The 25-year-old headed home a 57th minute winner against Luton Town to send Stanley through to the fourth round of the Emirates FA Cup, picking up the significant prize money along the way.

But for the former Aldershot man, his first goal at league level was worth more than money to him.

“It was good to get a goal,” said the 25-year-old. “I feel like it’s long overdue but I am buzzing to start the new year with a goal and a win.

“To get my first goal at this level was massive. It’s about reaching a milestone and now hopefully I can kick on to the next one.”

While Beckles was selected as the sponsor’s Man of the Match, he felt one of his team mates deserved it.

Sean McConville scored a wonder goal to kick off proceedings and then provided the cross for Beckles to head home.

“He was unbelievable,” continued Beckles. “I thought I nicked that Man of the Match off him as he deserved it fully, he was outstanding and every single cross he put in I could have had a goal.

“His deliveries were superb and I knew as soon as the cross came in that I was on the end of it.

“It was a tough game, we played really well in the first half and they put us under pressure in the second half. They are a good team so I felt we did well to bounce back from their goal and get a win.”

Stanley are now in the hat for the fourth round draw on Monday night with the likes of Arsenal, Manchester United and Manchester City.

“It’s a massive achievement getting to the fourth round and we are all looking forward to it,” said Beckles.

“The club wants to push forward, they don’t want to be looking back, and it’s about climbing up the table and the FA Cup money may help the team.

“I really not fussed who we get in the next round and I am stuck in two minds.

“You really want a big Premier League team but at the same time you want to get someone beatable and get into the next round so we are not fussed, we will cross that bridge after tomorrow night.”

And Beckles hopes they can now build on this in the league and move out of the bottom half.

“It is a relatively new squad and it’s taken us longer than expected to gel but I feel like we are heading in the right direction.

“We are buzzing, unbeaten in the last two league games and this is a big scalp beating Luton in the third round of the FA Cup and hopefully we can kick on in this competition and the league.”

One thing Beckles will work on is his goal celebration.

“I just spread my arms like wings. I have no idea why I did it but that may be my thing now!”