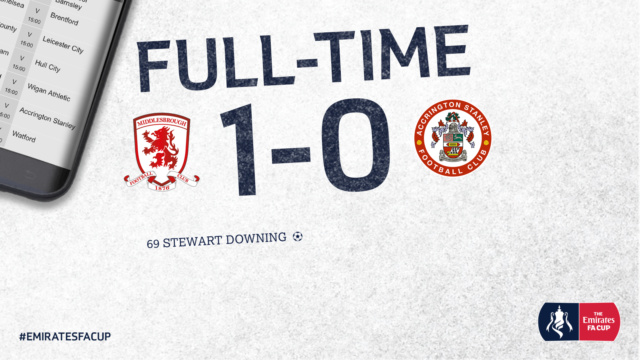 Stewart Downing scored a wonder goal to see of a battling Stanley in the fourth round of the Emirates FA Cup.

The Reds were looking to make history by reaching the fifth round for the first time but former England winger Downing found the back of the net from 20 yards on 69 minutes to end Stanley’s dreams and send Middlesbrough through.

It was gutting for the Reds who had fought hard and hadn’t been overrun by the Premier League side but couldn’t find an answer to Downing’s strike.

It was a cagey first half despite Aitor Karanka starting £6m signings  Patrick Bamford and  Rudy Gestede.

Boro had to make an early substitution with George Friend hobbling off after nine minutes, replaced by Dael Fry.

Neither side tested the opposition keeper in the opening 15 minutes with Stanley creating the first real chance when a Sean McConville corner found the head of Omar Beckles but he couldn’t find the target.

Boro’s first opportunity came on 19 minutes with a free kick from Downing fell to Viktor Fischer but his effort sailed across the goal and just wide.

The Premier League side had another chance moments later with Downing firing just over from the edge of the area and the former England man also sent a free kick inches off-target on 25 minutes.

Stanley were keeping out Boro although Bamford did have a great chance to give his side the lead on 36 minutes but a deflection sent his strike inches wide of the post.

At the other end, Sheffield Wednesday loanee Sean Clare went charging into the area, forcing a save at the near post from Dimi Konstantopoulos from just a couple of yards out as the Reds looked for the opener before half-time.

Stanley survived an early goalmouth scramble after the break while Arron Davies tried his luck from distance but it was over the bar.

A Bamford deflected effort was easily collected by Rodak while captain Seamus Conneely put his body on the line a number of times including stopping a Fischer goalbound shot in the 60th minute.

However Rodak could do nothing about Downing’s strike which rifled into the back of the net.

Stanley almost levelled on 82 minutes when Janoi Donacien’s ball in was headed back across the area by Harvey Rodgers and McConville got his head to it but sent it just inches wide of the post.

Billy Kee also had a late chance from eight yards out but couldn’t get any power behind his shot.

However Rodak was needed in the final minute of normal time to keep out  Cristhian Stuani’s strike after the substitute was clean through and Stuani also fired over with the goal at his mercy in injury time.