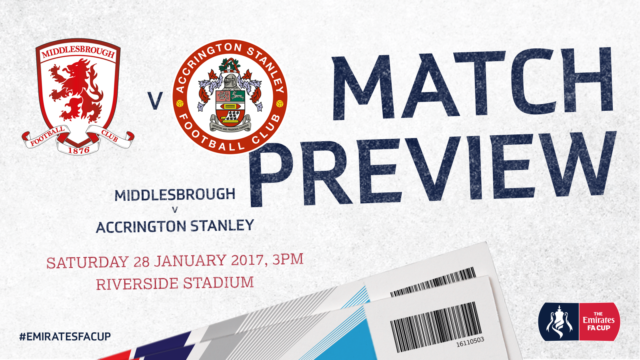 A place in the fifth round of the Emirates FA Cup is at stake at the Riverside Stadium tomorrow.

Premier League side Middlesbrough host Stanley as both look to book a place in the last 16.

Stanley are in the fourth round of the Emirates FA Cup for only the second time in modern times.

For the third time this season they take on Premier League opposition, hoping to overcome Middlesbrough to make it through.

A repeat of the EFL Cup win over Burnley would see John Coleman’s side in to the last 16 for the first time.

The Reds bounced back from defeat at Cheltenham with a battling performance to draw 1-1 with high flying Carlisle with ten men last time out.

They’ve lost one of their last five games in all competitions.

John Coleman’s side are currently 20th in League Two.

Brayden Shaw returns to first team contention having completed his loan spell with Bangor City and received international clearance to come back to England.

Matty Pearson and Scott Brown both miss the game due to recent red cards.

Shay McCartan is the only player involved when the Reds beat Boro in the League Cup in 2013 and could feature again at the Riverside.

Middlesbrough won promotion to the Premier League last season and have set about trying to establish themselves in the top flight during this campaign.

They’re currently 16th in the table, four points clear of the relegation places.

Aitor Karanka’s side beat Sheffield Wednesday in the third round. That’s their only victory in their last six in all competitions.

Karanka, Boro’s first foreign No 1, worked under Jose Mourinho at the Bernabeu and was widely regarded as one of Europe’s brightest young coaching talents.

He left Real Madrid in summer 2013 on the arrival of Carlo Ancelotti who took over from Chelsea-bound Mourinho. Before joining their coaching staff, he was manager of the Spanish U-16 team.

He also represented Real Madrid as a player, making 93 appearances for them between 1997 and 2002 and winning the Champions League in 2000 when they beat Valencia 3-0.