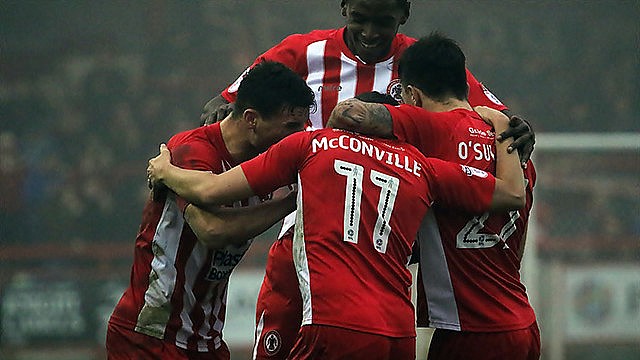 Sean McConville admits Stanley’s players will have their eyes on tonight’s Emirates FA Cup fourth round draw after progressing on Saturday.

The winger scored a superb goal and provided the cross for Omar Beckles to head home the winner as the Reds overcame Luton Town at the Wham Stadium.

John Coleman’s side are into the last 32 for the first time since 2010 and only the second time since the 1950’s and McConville is well aware how important the victory was.

“Everyone is made up, I think more so with getting a win at home because we’ve struggled at home and we just needed to arrest that slide and win a game,” he explained. “We’ve played worse teams than Luton, who I think will go up this year, and lost so to get a win and get into the fourth round is some feat really.

“(For the goal) I was looking to slide someone in and saw their back three drop off. I’d had a sighter earlier in the half that went over the stand and I thought to myself I couldn’t hit it as bad as that again so I bent it round and luckily it went in the top corner.

“I’m made up for big Omar. He was delighted in the dressing room and so were all the lads.”

Tonight’s draw takes place in London, with some of the biggest names in English football still in the hat.

But McConville has his eyes on plotting a route to the fifth round.

“Personally I’d like the lowest ranked team we can get, at home, to give us the best chance of getting to the fifth round and making a bit of history for the club,” he said. “We want to keep this run going and fly the flag for League Two.”