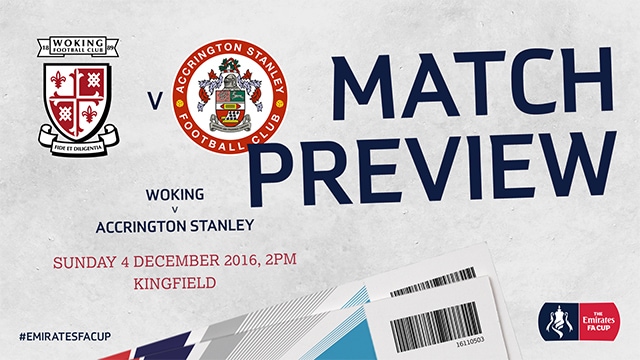 It’s a break from the league tomorrow as the Emirates FA Cup takes centre stage.

The second round sees Stanley return to the site of one of their most famous days to take on Woking.

A decade after a 1-0 win at Woking’s Kingfield Stadium brought Stanley promotion back to the Football League after a 44 year absence and the Conference title, they return to the Surrey ground for this first time.

This time there is a division between the sides but with the Cards in fine form in the National League they present a formidable prospect.

The Reds ended a run of four successive defeats with a last minute equaliser against Yeovil in League Two last weekend.

Their last victory was in the first round of the cup, at Bradford City.

John Coleman’s side are currently 20th in League Two.

Zak Vyner is the major doubt for the Reds after the Bristol City loanee was stretchered off in the game against Yeovil. The full back has been undergoing a series of tests this week, with the results determining his availability.

Janoi Donacien is the only definite absentee, with his recovery from surgery likely to take another ten days to two weeks.

Rommy Boco, the last remaining member of the 2006 promotion winning squad, scored a last gasp leveller last time out and could be in contention to start.

This is Woking’s fourth season back in the National League, or Conference to give it the traditional name.

They’ve endured a tough start to the season but have picked up their form in recent weeks to begin the climb away from danger.

The Cards have won three of their last four league games as well as triumphing in their cup first round tie at Stockport.

They sit 19th in the National League ahead of kick off.

He has a wealth of non-league managerial experience, beginning with Heybridge Swifts and St Albans City and then enjoying success with Dagenham & Redbridge.

He also spent time with Hornchurch and Weymouth before arriving to take over at Kingfield and help them back into the top tier of non-league football.

There are no advance sales for this cup tie, with cash only payments on the turnstiles.

The prices are £10 for all paying supporters and Under 16s are free.

Stanley fans will be in the open Tennis Club Terrace and there is a seated covered area.