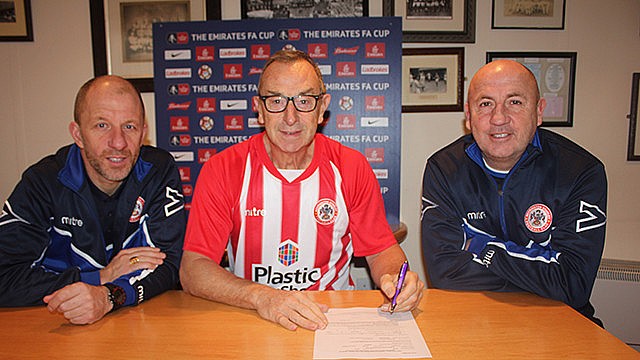 Accrington Stanley have made their first #upinlights signing of David ‘Bumble’ Lloyd.

The cricket ace – and former Stanley player of the 1960s – popped into the Wham Stadium to put pen to paper on a deal.

Manager John Coleman and assistant Jimmy Bell were there to oversee the top signing who, they admitted at 69, would add some experience to their squad.

“I want number 99 not out – or 99 run out,” smiled Accrington-born Sky commentator Lloyd. “It’s the pull of coming back, I like to play in a 4-4-3 formation and my best position is wide of the back five!

“We have a wonderful squad here and looking forward to getting into the thick of it.

“I have a sweet left foot – if you want to compare me to a player it’s Glenn Hoddle.”

“David will certainly raise our average age which is not always a bad thing but I don’t think he will bring a lot of pace or be good in the air as he doesn’t like flying!” said manager Coleman.

“He wasn’t known for his attacking prowess – with the bat – so he will block things and shut up shop at the back.”

The #upinlights campaign has been launched by the Official Accrington Stanley Supporters Association to raise £40,000 for a new electronic scoreboard at the Wham Stadium.

It’s based on a buying a series of rewards such as, as Bumble has, signing for Stanley, there is also a chance to train with Stanley’s first team squad during pre-season, there are signed Stanley shirts up for grabs, a signed Matty Pearson photo  of his winning goal against Burnley and lots more.

“We are supporting the #upinlights campaign as it would be great to show the fans a replay of goals and great moments at Stanley – and we have had lot of them,” added Coleman.