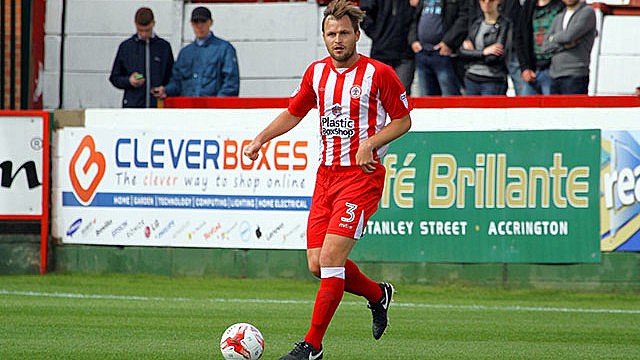 The Reds won for the first time in six at Kingfield to set up a third round tie with Luton and are now preparing for the league trip to Leyton Orient on Saturday.

The defender now wants to see a knock on effect for the team, who last won a League Two match in mid-October.

“It’s about putting a run together,” said the 29-year-old. “We’ve done a lot of talking but it’s not early in the season any more. We’re getting to the midpoint now and if you ask any club they’ll say that four or five games in three weeks in December can be crucial.

“The next part of the season is massive because you want to be looking up rather than down.

“We put in a great effort to get a point against Yeovil and they’ve gone on to show they’re a handy side with a big win so we know how hard it is to play in League Two.

“Newport are three points behind us and we played them four weeks ago and they were ten points behind us. It’s very tight and if you can put a run together it can change everything.

“When you come into this Christmas period it can be make or break for the second part of the season.

“Any team that loses a couple is right down there and if you win a couple you can see the play-offs. This year has been crazy so far. I think if we finished on the same points as last year we’d probably win the league but that’s just the way it is.”

John Coleman’s team had been on a lengthy run without scoring before netting a leveller against Yeovil and then winning in the cup, with Hughes believing those results have been a big boost to everyone in the dressing room.

“We knew confidence wasn’t at its highest and that’s what happens when you’ve been losing games but this is a club where you never change no matter what the results are,” he explained. “I think it’s the best club I’ve been at when results are going bad because we stick to the way we want to play.

“I’ve been at clubs where you start playing the percentage ball or just kick the ball as far as you can from your own goal but we keep playing the same way and believing we’re doing the right things. That’s what the gaffer and Jimmy have installed in us.

“It hasn’t been easy and we all knew we needed to get a goal and get our noses in front at Woking. Any player will tell you how important that is and that’s we managed to do. We ended up seeing it out pretty comfortably.”