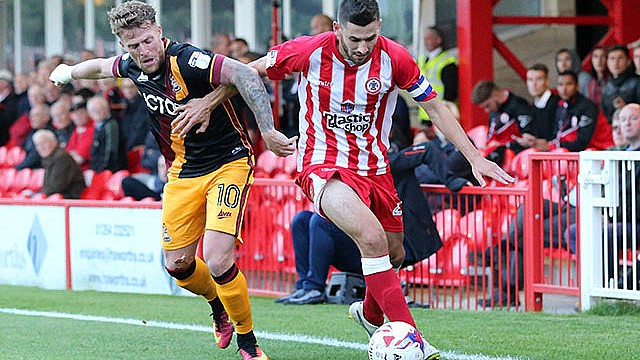 Conneely out to upset leaders

The Pilgrims, after missing out on promotion like Stanley in the play-offs in May, have bounced straight back this season and are setting the pace at the top of the table.

Stanley are without a league win since mid-October but Conneely knows Stanley tend to play better against the higher-placed sides and are out to move up the league.

“I think this is a good game for us to play as we had two good performances against Plymouth last season and we hope we can put in another good performance tomorrow,” said Conneely, who has recovered from a groin strain which kept him out of last week’s 1-0 loss at Leyton Orient.

“Not many people outside of Accrington will expect us to beat the top of the table but we expect ourselves to win and we feel we can compete, as a squad, with anyone in this league.

“This will be a bench mark for us to see if we can. I know our form hasn’t been good but we have an inner belief in ourselves that we can get results against any team in League Two and this is the time to prove it.

“We do tend to play better against the higher teams – perhaps they let us play a bit more.”

Conneely admits it has been mental as well as physical training this week as Stanley look to find much-needed goals to turn their season around.

“We have been going through it in training this week and getting a positive mindset that we will score and picturing yourself scoring. At the moment, confidence is probably a bit low in front of goal and we need to believe that chances will go in – as we are creating them.

“We know Plymouth will be a big test. They started well, had a bit of a poor run but then got a great result last week against Doncaster to move back to the top of the table.

“They got out of ‘the rot’ quickly and it’s important we do too – we need to get that win and need it pretty badly.”