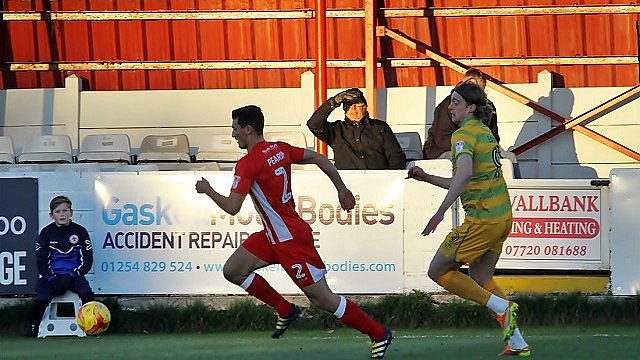 Matty sure Reds are on the up

Matty Pearson admits that the run of games without a win is hitting him hard – but he is confident Stanley will turn it around.

The Reds last won a league game on October 15th and they have dropped from the play-off spots into the bottom five in that time.

The defender signed for Stanley in summer 2015 and enjoyed the success of last season’s promotion-chasing campaign so battling at the lower end of the table is something he isn’t used to.

“It’s not nice is it?” said the 23-year-old. “I have never been on a run like this in my life, I have never experienced anything like losing four games on the bounce, and I don’t like it.

“We are really struggling for goals and it’s something which hasn’t happened in my time here before.

“We haven’t lost games by big margins – it’s been 1-0 or a lot of draws – and if we had just taken a couple of our chances we would be a lot better off in terms of points.

“But we know the table is tight and a run of wins could get us back into the play-off spots. We just need to score.”

Pearson admitted it was agony missing the 2-0 defeat at Hartlepool midweek with a one-match ban – he had played in every league game since he came to Stanley.

“I think it was 63 successive league games so it was hard to sit out Hartlepool but it was good to be back against Yeovil.

“It did look bleak so it was vital Rommy (Boc0) equalised for us – we really needed it. I don’t like looking at the table at the moment but we are confident we can climb back up it.”

First though it’s the Emirates FA Cup second round tie at Conference side Woking on Sunday – a team Pearson knows well from his Halifax days.

“I have played there before and I think their pitch will suit us,” said Pearson. “It’s a massive game for us and we need to win and hopefully take that momentum into our league games.

“I have got two goals this season and need to chip in with more and we just need to score more – I am sure we will and we can push up the table.”