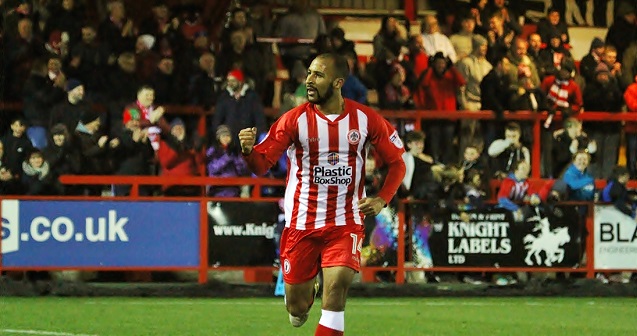 Goal for the fans: Boco

Rommy Boco dedicated his late goal to the Stanley fans and admitted it was a ‘special’ moment for him.

The one-time Benin captain came off the bench against Yeovil to net in the 91st minute and secure a point for Stanley.

It ended a run of four successive league defeats for the Reds and gave the supporters something to celebrate after seven-and-a-half hours without a goal.

“The fans always back me, they always sing my name when I warm up and it’s something special, I appreciate it,” said the 31-year-old, who has now scored seven goals for the season.

“That goal was for them, they keep shouting my name, and to produce a goal is a bonus for me, the fans and the club.”

John Coleman called Boco ‘ice cool’ when the ball fell to him in the box and the frontman admitted: “I did have to keep my cool. I could have just smashed it but I thought about it. The first thing was to get it on target as, if you get it on target there is always the chance of a goal, and thankfully it went in.

“It was so important to get something out of the game as we had lost four league games in a row and when you look at the table it wasn’t nice.

“But we showed a great attitude and we managed to come back into it which is great for our moral. Now we have to try and move up the table and hopefully this result will kick us on.”