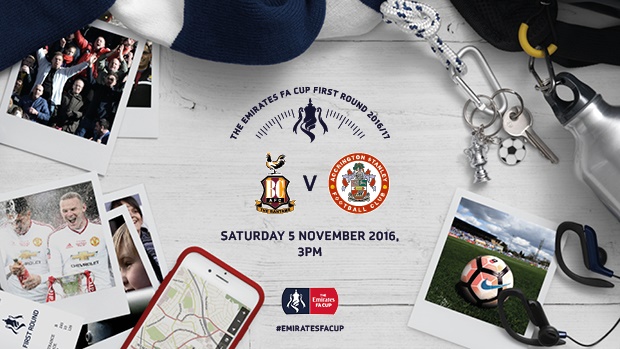 The Reds travel to League One Bradford City for the first round tie.

It’s a break from the league for Stanley, who embark on their FA Cup campaign looking for some more knockout success.

After the EFL Cup brought wins over this weekend’s opponents Bradford and neighbours Burnley before a narrow defeat at West Ham, they’ll be looking for more of the same in the other big cup competition.

The Bantams may well be out for revenge though after their penalty shoot out defeat at the Wham Stadium in August.

The Reds lost for the first time in five when they were beaten 3-1 by Newport on Saturday.

Away form has been promising though, with just three defeats away from the Wham Stadium in all competitions.

Billy Kee is back in contention for the Reds having made his return to first team training this week.

Coleman has a few minor injury concerns but nothing that has definitely ruled anyone out in the build up.

Changes have been made in cup competitions this season and that could continue at Valley Parade.

After promotion to League One in 2013 – they beat Northampton at Wembley – Bradford have proved a force to be reckoned with in League One, just missing out on the play-offs in 2014/15 and then finishing in fifth place with 80 points last season.

There was no Wembley return for the Bantams though after they lost to Millwall in the play-off semi-finals.

This year they are in contention again, sitting third in League One ahead of this weekend having lost just once in the league this season.

Bradford hero McCall became manager of City for the second time in June this year, replacing Phil Parkinson who took over at Bolton Wanderers.

He has since managed at Motherwell and Rangers before returning to Valley Parade.

Tickets are on sale from the Wham Stadium until 4pm on Friday 4th.