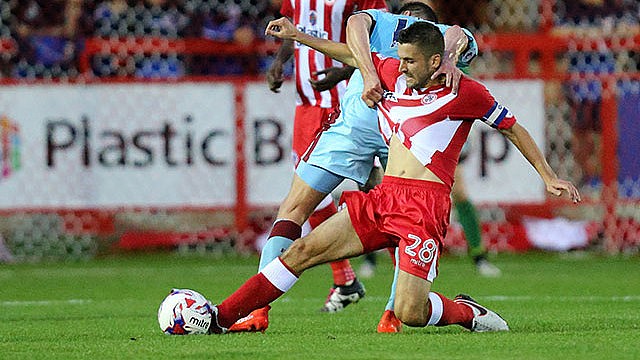 Seamus Conneely is hoping for a goal-den day against Stevenage on Saturday – as he knows Stanley need to find the back of the net more.

The Reds have scored one goal in their last three SkyBet League Two games and have one win in seven league games.

They are still in a strong position in the table in 11th place, just two points off the play-off places, but need to re-find their form.

“We need to score more goals – that’s our main problem,” said the Stanley captain. “We never really threatened against Luton last week and never got going in the second half.

“They launched wave after wave of attacks and eventually the pressure led to them scoring the only goal and they deserved the three points.

“We have got to look at being more creative and more clinical in the final third. It’s something we have been working on all week and hopefully we will see the rewards.”

Conneely admits the draw with Stevenage on the final day of last season, which cost the Reds automatic promotion, still hurts but he is only looking forward as Stanley need to improve the results at the Wham Stadium.

They have won three, lost three and drawn two of their eight league games at home.

“Obviously we have bad memories of last season but we have got to look forward and it’s a great chance for us to get three points and get into a play-off position and that’s now our main focus,” said Conneely.

“We have got to improve our home form, be more exciting, get the crowd into the game and score more goals.

“I don’t think we have shown the home fans what we are capable of and it’s important we do that.

“Our form isn’t terrible as we haven’t lost that many but what we have done, is drawn too many and we need to turn the draws into wins.

“The table is so close – just five points separates sixth place and 22nd – and any team which puts a run together will shoot up the table and the ones who don’t, will fall away.

“I am always confident we will win and I am sure we will go in the right direction.”