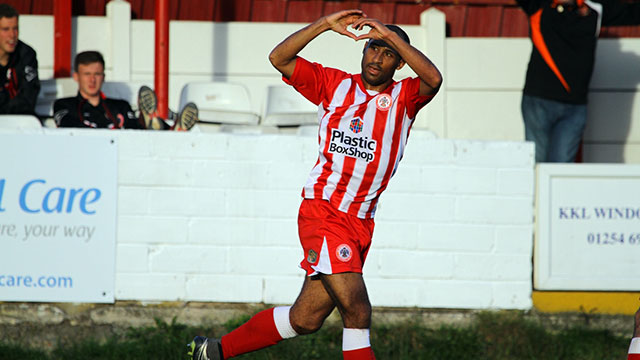 Rommy Boco admitted it was a ‘good feeling’ as his late double saw off Blackpool.

The 31-year-old scored an 89th minute penalty – which he was fouled for – and then fired home a winner in the 94th minute to secure victory for Stanley which pushed them up to seventh spot in League Two.

Michael Cain had given the Seasiders an 81st minute lead in the first competitive league meeting between the sides.

“I was pushed for the penalty, you don’t always see them given, but the referee had courage to give it,” said the former Benin international.

“The gaffer had a go at me after I didn’t take a penalty at Cambridge – when we had two saved –  and he asked me why I hadn’t taken one then.

“I said if a player fancies it then it’s hard to take the ball off them and the responsibility becomes bigger on you if you miss.

“But before the Blackpool game I was told, if I was on the pitch, I was on penalties and I knew where I was going to put it.

“Then we pushed on and luckily enough we got the winner. It was a good feeling.

“Luck went out our way. We may have not deserved the win but last week against Cheltenham we deserved more and ended up drawing so we will take it.”

And Boco feels there is more to come from him – he already has five goals this season.

“People have written me off in the past, said I was finished, and I am determined to prove them wrong.

“I know I will not play 46 games a season but I am enjoying it and every goal and every game is an addition to my career and an achievement.”