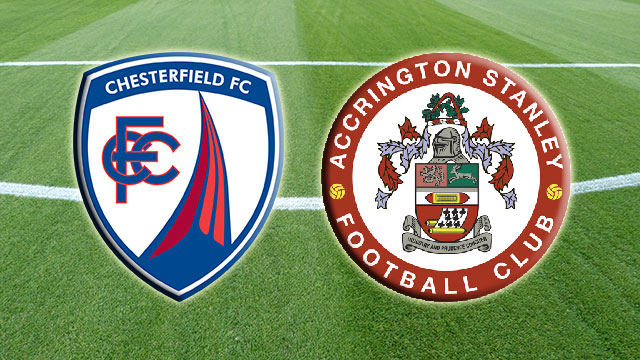 The Reds return to the Checkatrade Trophy tomorrow evening as they make the trip to Chesterfield.

John Coleman’s side will be be keen to get their group campaign going with a win at the Proact Stadium.

After losing their opening Checkatrade Trophy group match at home to Crewe, Stanley’s second game could prove crucial to their hopes of qualification for the knockout phase.

The Reds travel to the Proact Stadium looking to secure a victory over Chesterfield.

After a first league defeat in five at the weekend it also presents a chance to bounce back at the first time of asking.

Stanley’s good run of five games unbeaten in League Two came to an end with defeat at Cambridge at the weekend.

Now they’ll be keen to start a new one and with performances on the road having been good this season they’ll be hopeful of victory.

The Reds are currently bottom of group B after losing 3-0 to Crewe with the Spireites top after a 2-1 victory over Wolves Academy in their first game.

The injury list remains much the same as for the trip to Cambridge, with captain Seamus Conneely still a doubt, John O’Sullivan still sidelined Shay McCartan unlikely to be involved.

Janoi Donacien and Sean McConville both picked up their fifth yellow cards of the season at the weekend but will serve their suspensions in the league against Cheltenham rather than tomorrow evening.

Forward Gary Taylor-Fletcher, who signed on non-contract terms today, will be available to John Coleman subject to EFL ratification.

Chesterfield sit 17th in League One ahead of the match following a weekend defeat to Bradford City.

They’ve been back in the third tier since 2014 when they won the League Two title under the guidance of former Stanley manager Paul Cook.

They made the play-offs in the following season, losing in the semi-finals to Preston North End and finished last season in 18th position.

Danny Wilson was appointed the Spireites manager in late December 2015.

He played for Chesterfield in the early 1980s and spent three years at the club, playing for them over 100 times and became a fan favourite.

He began his management career with Barnsley and led them to promotion to the Premier League in 1998.

Since he’s been in charge of Sheffield Wednesday, Swindon Town, Sheffield United and spent another spell with Barnsley