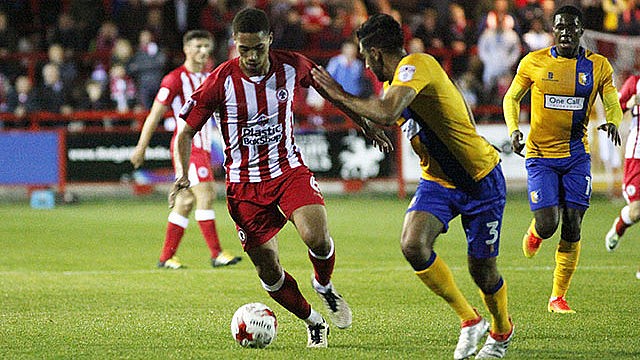 Stanley loanee Zak Vyner is pleased to have made a good start to his career with the Reds and thinks the squad is becoming closer with every game.

The Bristol City youngster has become a regular in the side since joining on loan on transfer deadline day.

And the teenager admits he’s having to adapt to the rigours of the League Two fixture list but is being helped a lot by his team mates.

“The training is cut down because we have more games but you then adapt and learn in the games,” said the full back. “We’ve had to adapt to players coming on and going off and I think we’ve done that well. You do get less time on the training field when it’s this busy but you also need your rest and that’s important.

“When you’ve got good defenders around you I think it makes it a bit easier to settle in. I’ve come in and I think I’ve done well. I’ve not lost a league game yet, which is always a good thing, but I’m determined for that to continue.

“The players we have here, Matty Pearson, Omar Beckles, Mark Hughes and Janoi Donacien and all the lads really, are good defenders and if the manager takes one of us out then another is able to slot in.”

The Reds are unbeaten in five league games ahead of Saturday’s trip to Cambridge, with the only defeat this month coming at West Ham in the EFL Cup.

Vyner’s been impressed with the response but doesn’t believe anyone will get complacent.

“Since the West Ham game we’ve played well in patches but I think everyone looked at that one because of the team we were playing,” he continued. “It was obviously a great performance by our team but I think people just noticed it more. We’ve done just as well in other games.

“We recovered well from that defeat. It was a big blow to lose in that manner. It was obviously a great goal but it was horrible. I thought we did well in the second half at Colchester on Saturday to pick ourselves up, come back and win the game.

“Our current run gives us confidence but we can’t afford to dwell on it. You have to keep looking forward to the next one and the next Saturday or Tuesday.

“You look at the table but not too much. You have to look at the team you’re playing and make sure you’re ready for them, not what position they are in.”