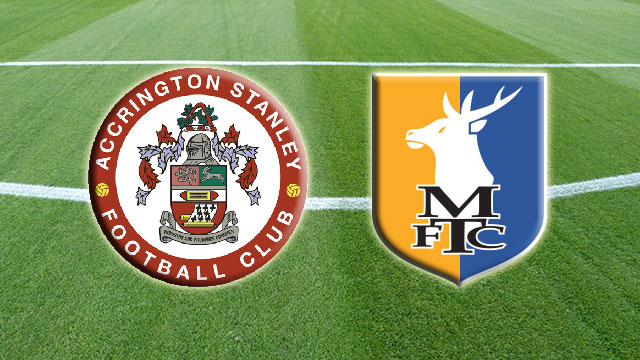 It’s back to the Wham Stadium for the Reds tomorrow as John Coleman’s team host Mansfield Town.

Stanley will aim to make it four league wins on the spin after Saturday’s away victory at Colchester.

The Reds have clocked up the miles in the last week but now return home for a League Two game with Mansfield Town.

Defeat at West Ham in the EFL Cup aside recent results have been promising and John Coleman’s men will look to keep it up.

They’ve moved into the top half of the table and will now be out to continue their progress by taking all three points against the Stags.

Stanley are unbeaten in four league games ahead of kick off.

The first of those was a 1-1 draw at Carlisle but three wins, against Notts County, Portsmouth and Colchester have followed.

John Coleman’s team are now tenth in League Two, two points and two places better off than their visitors.

Midfielder Scott Brown is suspended after he was shown a second yellow card late in the win at Colchester on Saturday.

Captain Seamus Conneely remains an injury doubt after limping out of Wednesday’s game at West Ham and missing the weekend trip to the Weston Homes Community Stadium.

Paddy Lacey could again deputise with the likes of Steven Hewitt and Arron Davies also in the frame in the middle of the park.

Mansfield Town have been back in League Two since winning the Conference title in 2013 and have set about establishing themselves back in the fourth tier.

Under the management of Adam Murray they finished 12th in League Two last season.

So far this campaign has brought mixed fortunes and the Stags head to the Wham Stadium 13th in the league table.

They’re currently on a run of four league games without a win.

Adam Murray was unveiled as the new manager of Mansfield Town in early December 2014.

The 34-year-old is the youngest boss in the Football League and has transformed the team’s playing style with quick, attacking football.

Murray, a popular figure at Mansfield, has amassed more than 500 appearances during his 17-year playing career and winning promotion no fewer than five times. In a combined captain/assistant manager role, Murray then made 38 appearances as the Stags defied the odds to win the Blue Square Bet Premier title in 2012/13 – and with it achieve promotion back to the Football League.