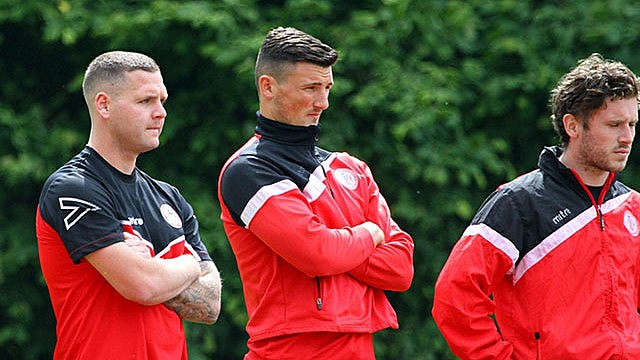 Matty Pearson knows the areas where Stanley need to improve – and he is certain they will climb the table.

The Reds battled to a 1-1 draw at unbeaten Carlisle and, despite being 21st in League Two, the signs were good.

Stanley were under pressure in the first half but Billy Kee opened the scoring for the Reds on 58 minutes before Nicky Adams equalised at Brunton Park.

“It was a real battle, a few of the lads have some bangs but it is a good point for us,” said the defender, who was many people’s Man of the Match on Saturday.

“They were on top in the first half but I think we defended really well and Zak (Vyner) did well on his debut.

“The gaffer wasn’t happy at half-time – he was happy with a goalless scoreline but wanted us to attack more, to pass the ball better, keep possession and not turn over the ball so easily.

“The second half was a much better performance and it was a great goal by Billy and we were just gutted we couldn’t hold on but that will always happen in games.

“While a point is a good result at Carlisle we need a clean sheet now. We haven’t had one in the league yet – while we have had two in 90 minutes in the EFL Cup -but we really want one in the league.

“It is very early days in the season, we know what we need to do to improve – we need to keep the ball better and use it better. We know how we want to play and I am sure we will get there.”