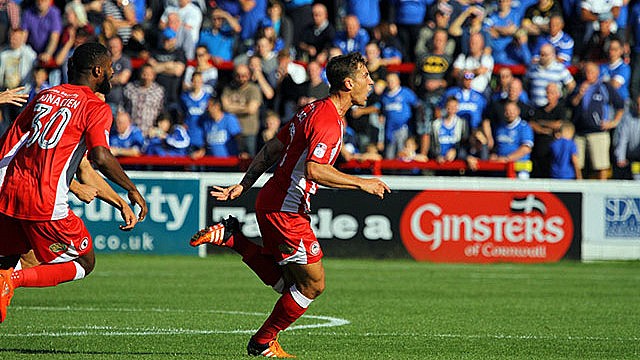 Paddy Lacey feels he was rewarded for having a go after scoring his first Football League goal against Portsmouth.

The 23-year-old’s super strike in the second half was the difference between the sides as Stanley won 1-0.

And the midfielder was delighted that taking a chance paid off for him.

“In the first half I tried to thread a few passes through and force it a bit and at half time I got told if the shot is on then let it go,” he explained. “It was the first thing that was on my mind, to get a shot off, and fortunately for me it went in.

“I’ve scored a few decent goals in pre-season amongst ourselves and behind closed doors. I’ve got a decent strike and always feel like I’ll pop up with a couple and I’m just happy to get one on my first start.”

It was Lacey’s first League Two start for the Reds after joining on a free transfer in the summer and he’s pleased he was able to seize his chance.

“The manager pulled me over before the game and told me I’d be playing and I was as surprised as anyone,” he said. “We’ve got top lads in midfield here and it was a big game so I was over the moon to play.

“I think both teams were a bit tentative and it was a bit of a scrappy game. One goal was always going to decide it and luckily we got it.

“I think we’re looking solid at the back now so if we can start popping up with a few goals and keep it clean at the back we can shoot up that league table now.

“We had a lot of new players in pre-season and it’s taken a bit of time to gel and we knew mistakes would be made but the gaffer and Jimmy have been working hard to iron them out and we look better week by week to be honest.

“We’re all here to help out the team. If we’re needed next week and not needed the next that’s just part of football. There’s lots of competition.”