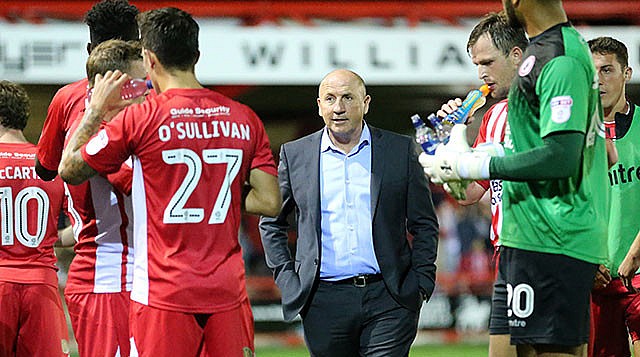 John Coleman wants his players to enjoy their trip to West Ham – and says the best way to enjoy it is to win.

Stanley travel to the London Stadium to take on the Premier League side in the third round of the EFL Cup tomorrow night.

The Reds beat League One Bradford City in the first round on penalties and then overcame Premier League Burnley at the Wham Stadium with a last gasp extra-time Matty Pearson goal.

Now they take on the Hammers with Coleman knowing his players need to enjoy the big stage, where the 2012 Olympics took place.

“The players have earned the right to play there with their wins over Bradford and Burnley which were two tough games,” said Coleman, who celebrated his second year back in charge this week.

“They have earned the right  to enjoy this and the best way to properly enjoy it, is to win.

“We will be going out there to win. It is hard to prepare for this one as we don’t know what  team they will put out but we do know their style of play.

“It will be a good side whoever we play as they are Premier League players. We will not be going there to park the bus, we will be going there to attack and score goals and if that means we get beat 7-0 so be it.

“We believe in our own ability and it’s a chance for the players to play in a big stadium in front of a big crowd.”

There’s a family connection for Coleman, who is trying to get his grandson to support Stanley over the Hammers.

“My son-in-law lives in Dubai and he is a West Ham supporter and apparently my daughter and him woke the house up when the draw was made!

“It’s my son-in-law’s first visit to the London Stadium, even though he is West Ham season-ticket holder, but my grandson is still at that age where he can change his mind at the moment.”

Around 600 Stanley fans are expected to make the trip to East London and Coleman added: “We have had away trips where we have taken 500 or 600 fans and they have drowned out the 10-20,000 fans of the opposing team. Let’s hope we can serve up a treat and a performance they can be proud of.”