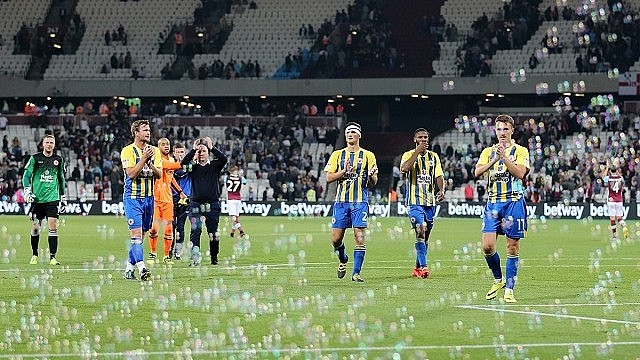 All about league now: Matty

The Reds were knocked out of the EFL Cup in the 96th minute to a Dimitri Payet free kick at the London Stadium on Wednesday at the third round stage.

The players admitted it was heart breaking but they have stayed down south and are now ready to take on Colchester, who have former Stanley striker Kurtis Guthrie and last season’s loan man Tariqe Fosu in their side.

“We have got to forget about West Ham now,” said defender Pearson. “We have stayed down south so we will have a good craic and get back onto it at Colchester.

“We have had our little bit of enjoyment and we do need to get our head around the defeat but now it’s back to the proper stuff.”

Pearson, who needed treatment to a cut eye on Wednesday, received praise from West Ham fans for applauding Payet’s free kick despite feeling the hurt of the late winner for the Hammers.

“It’s Payet isn’t it?” said Pearson. “It’s just magic and sometimes there is nothing you can do but applaud skill like that. You don’t keep them out.”

Now they will face skills they know in Fosu who was on loan from Reading with the Reds last season and scored some important goals as Stanley finished fourth. Colchester are currently sixth in League Two after relegation last season.

“We know what Tariqe can do so he is someone we will have to keep an eye on,” added Pearson.