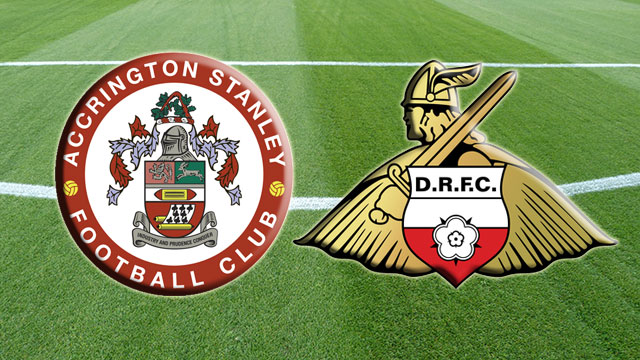 The new season begins with a new oppponent making the trip to the Wham Stadium.

Doncaster Rovers are in town as the Skybet EFL League Two campaign begins.

Both sides will be out to make a positive start with a busy period of fixtures to come.

Stanley could barely have been closer to promotion last season but find themselves still in League Two for the new campaign.

Summer departures have meant more than a dozen arrivals over the close season, meaning John Coleman will have a new look side out at the Wham Stadium.

A decade after first arriving in the Football League the Reds are in the unfamiliar position of not being among the favourites for relegation.

This is a first home game since May for the Reds, with all pre-season matches having coming away from the Wham Stadium.

Coleman’s side played a number of games behind closed doors in pre-season with public friendlies yielding mixed results.

Stanley’s last outing was on Saturday when they drew 0-0 at Halifax.

Lacey missed the latter part of pre-season through injury.

Goalkeeper Aaron Chapman could make a second Stanley debut if he gets the nod ahead of Parish in goal.

Shay McCartan and Billy Kee will hope to shake off pre-season knocks to be involved in the squad.

Janoi Donacien and Chris Eagles will also be included in the Stanley party after impressing in training on Friday.

Doncaster Rovers are back in the fourth tier of English football following their relegation from League One last season.

The Yorkshire side have retained Darren Ferguson as manager for the new campaign and he’s set about bringing in new players to help them get back to League One at the first time of asking.

The arrivals at the Keepmoat run into double figures but pre-season injury problems forced the cancellation of a couple of scheduled friendlies.

Darren Ferguson became manager of Doncaster in October 2015. The son of Sir Alex played for Manchester United, Wolves, Sparta Rotterdam, Wrexham and Peterborough during his career.

His first managerial role was at Posh from 2007-9 before he linked up with Preston in 2010 but they slipped to bottom of the Championship which led to him leaving. He returned to Peterborough from 2010-15, taking them into the Championship before relegation back to League One.