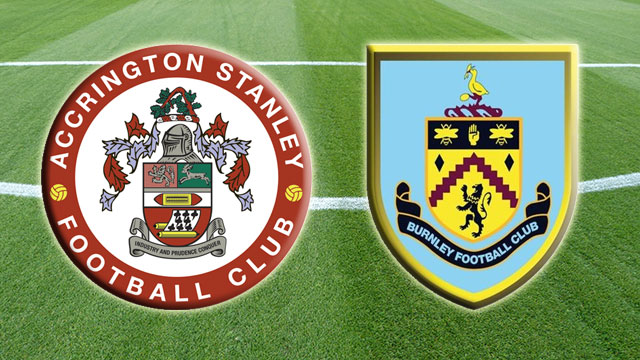 Attention turns to the EFL Cup tomorrow and a big local derby for the Reds.

John Coleman’s team host Premier League Burnley in the second round of the competition.

Stanley’s reward for their epic 11-10 penalty shootout win over Bradford in the first round of the EFL Cup could hardly have been bigger.

Newly promoted Burnley make the short trip to the Wham Stadium and will bring a couple of thousand supporters with them.

The Reds will aim to upset the top flight side and make it to the third round of the competition for the first time.

It’s won one, drawn one and lost two so far in the league for the Reds.

They’ll be keen to bounce back from the weekend home defeat to Exeter which saw the Grecians head home with a 2-1 victory.

Coleman’s men won on the opening day against Doncaster and in the cup against Bradford but haven’t tasted victory in the three matches since.

Terry Gornell and Scott Brown are again ruled out with groin and calf problems and won’t be involved.

Former Burnley winger Chris Eagles is an injury doubt having been on the bench for the Exeter game.

But another former Claret, Shay McCartan, has returned to training and could be in the squad.

Steven Hewitt is the other player with Burnley connections who could feature.

Burnley are back in the Premier League courtesy of their Championship title win last season.

It’s their third spell in the top flight in recent memory and this time they’ll be keen to stay their for more than just the one season.

They began their campaign with a narrow defeat to Swansea but will arrive in good spirits after a 2-0 victory over Liverpool at the weekend.

Sean Dyche took over as Burnley manager in October 2012 and has gone on to lead the club to the Premier League twice.

The former Watford boss secured the first automatic promotion 18 months after his arrival, though it was followed by relegation from the top flight in the following campaign.

Unpeturbed the Clarets came back stronger in 15/16 and won the Championship title.

Dyche knows plenty about the lower reaches of the Football League having spent a playing career with the likes of Chesterfield, Millwall and Watford.

Tickets are on sale from 10am on the day of the game from the offices at the Wham Stadium. Prices are as follows:

Concession £15  (will need proof to acquire a concession ticket)

Parking is available at Accrington Academy (entry via Entwistle Road BB5 5AE ). The cost is £2 per car.

Please use this facility if possible.