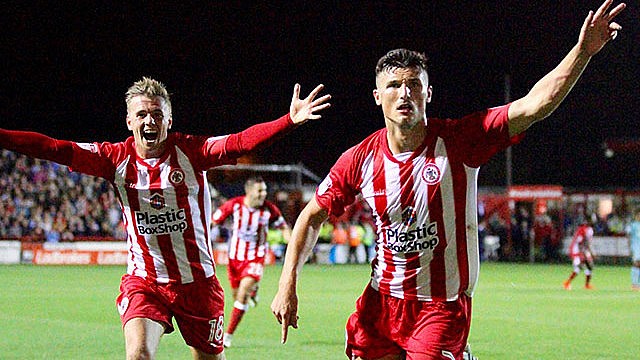 Matchwinner Matty Pearson feels the significance of his goal against Burnley didn’t immediately sink in.

The defender popped up in the final minute of extra time at the Wham Stadium to arrow in his second goal of the season and send the Reds to the third round of the EFL Cup for the first time.

He was swamped in the ensuing celebrations but only really grasped the importance of his contribution after the game.

“My goal is probably the most important goal I have scored, especially financially for the club,” said the 23-year-old. “It is mad to think that a few years ago I was playing in non-league and now I have just scored the winning goal, live on Sky against a Premier League side.

“You don’t think about it when you are playing but I had an opportunity and I have taken it and I am glad we have got another Premier League team (West Ham) in the next round and hope we can do it again.

“I remember Sean McConville’s ball in, the ball went up in the air, I have seen Omar (Beckles) shooting and it just fell to me. I just knew I was going to get it on target. Whether the keeper was going to save it or not I didn’t know but I just knew I would hit the target and would stand a chance.

“I have got that kind of mentality that, when the ball comes to me, I just have to smash it.

“I was relieved when it hit the back of the net – as least it meant we didn’t go to penalties – but it was good. I was buzzing.

“It was a tough game, there were some tough tackles but I think that’s what we have needed to show this season, it showed that we are up for the fight and we need to show that in the future.