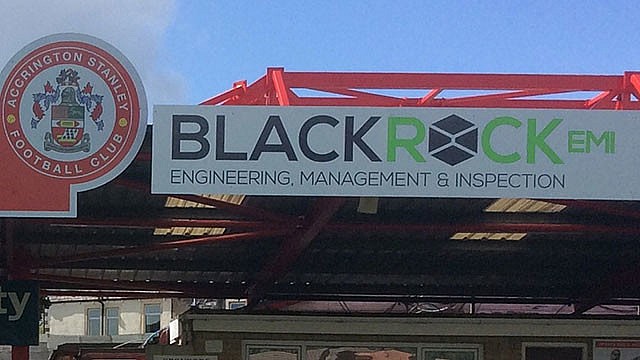 Accrington Stanley have a new sponsor for the Jack Barrett Memorial main stand with Blackrock EMI signing a three-year deal.

Blackrock EMI – which stands for Engineering, Management and Inspection – already sponsor Stanley’s EPPP Category 3 Academy  and they will soon open offices in Canada and London.

What started from Academy sponsorship has now turned into a significant three-year relationship with the Academy and the sponsorship of the Jack Barrett Memorial Stand.

“The soul of the Accrington Stanley is similar to the values of our corporations including Blackrock EMI,” said Robb, who attended Stanley’s recent clash with Barnet.

“We believe in community, family and a never-say-die attitude. This is what has built the success of our companies.

“We are also very excited with the direction Andy Holt has taken the club and the future of not only the first team but with the Academy. In the period of time we have known Dave Bailey it’s a club that shares our values and fighting spirit.

“Blackrock EMI is looking into expanding our international operations into the UK in the near future and sponsoring the Jack Barrett Memorial Stand helps bring recognition to our brand and our company.

“As well the fans need to know that we love this club, the passion, the fighting spirit. This is so much more than just a business deal, every Saturday we cheer on the Reds, we feel the sadness of defeat and the joy of victory.

“Our same feeling for first team football is equally shared with the Academy and the success being built there each day. There is such a strong foundation built with the younger ones and if our support can help just one dreamer to make it into the professional ranks, we have done our job.”

Stanley Managing Director Dave Burgess said: “We thank Robb for the support he has shown and this is a significant investment over three years into what we are trying to build at the club and the continued progress both on and off the field we are making.

“Robb has been so enthused by our Academy and how the staff are developing the next young Stanley stars and it just shows just how far the club has come over the last few years.”

As well as naming the stand, Robb and his company Blackrock EMI have their logo placed on the front of Academy training wear for both players and staff and they  have sponsored first year professional Nathan Webb and Ross Sykes, the current Under 18 youth player who recently signed a two-year professional contract – both players have come through the ranks of the academy. As part of the deal Blackrock EMI also have two seats at every home game for the Academy to use as part of a reward for players and staff.