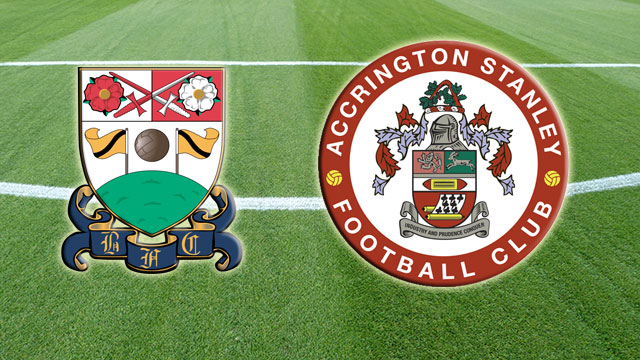 The first away trip of the new season sees Stanley return to the Hive.

The Reds take on Barnet looking to continue an encouraging start to the season.

After an opening day victory over Doncaster and the midweek penalties win over Bradford Stanley’s season continues with the trip to Barnet.

The Reds have shown signs of what they are capable of so far but manager John Coleman is keen for more.

They’ll be out to continue their unbeaten start to the season and pick up a first away win of the campaign.

It’s one league win from one for Stanley after goals from Rommy Boco, Matty Pearson and Sean McConville brought victory over Doncaster.

That was followed by a clean sheet after 120 minutes against Bradford in the EFL Cup and ultimate progression after an epic penalty shootout.

It’s likely to be too soon for striker Billy Kee, who continues to step up his recovery from a shoulder problem.

However, Sean McConville and Scott Brown, who both missed the midweek cup win over Bradford with knocks, have returned to training.

It was a steady first season for Barnet back in League Two finishing in 15th place – 28 points clear of the bottom two and 13 points off seventh place Wimbledon.

They kept hold of manager Martin Allen despite reported interest from other clubs and have boosted their chances of hitting the top seven this season with the signing of some experienced frontmen.

Allen has signed a contract extension with the Bees for an undisclosed length of time this summer.

Allen is in his fourth spell as Bees head coach, coming back in March 2014 most recently and signed a rolling contract in May 2015.

The 50-year-old led the club to the Conference title in the 2014-15 season, before finishing 15th in the League Two table last term.

Allen started his managerial career at the Hive in 2003 and had short spells in charge in 2011 and 2012, before returning once again following the departure of previous head coach Edgar Davids in 2014.