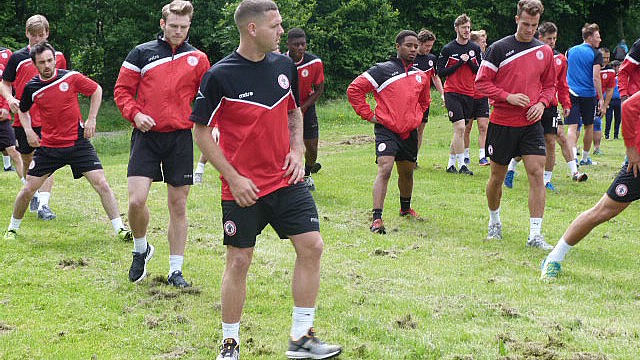 John Coleman is looking forward to locking horns with his friend Liam Watson who is manager of tomorrow’s opponents Stalybridge Celtic.

The Reds face the Conference North side in their second pre-season friendly, after drawing 1-1 with Skelmersdale United midweek – a result which upset Coleman after Skem scored a last minute goal.

“We are in the business of winning games and we have to realise that. We have got to do whatever it takes to win games and I think we lost sight of that on Tuesday.

“I am excited about playing any football match and Liam is my mate and has done well as a manager. I don’t think he gets the credit he deserves for what he did at Southport and Burscough to an extent.

“Liam is one of the rare players that can boast that he has played for Accrington and never been on the losing side so he has strong links to Accrington.”

Coleman admits it will be a strong side against Celtic as he has almost assembled his squad ready for the League Two campaign.

“I am pleased with the squad. I would like to add one more, who I am speaking to, but will wait and see on that one.

“Now it’s about getting the players up to peak fitness at the right time, for the first game of the season against Doncaster.

“Some of our players will be playing against Radcliffe in a youth team game tomorrow morning and then others are playing in the afternoon so they are starting to get 90 minutes under their belt.”