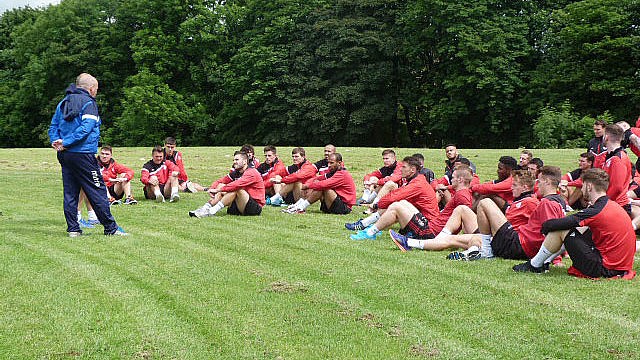 John Coleman cancelled the day off for the Stanley players this week after their 1-1 draw with Evo-Stik side Skelmersdale tonight.

Stanley dominated possession and took the lead when Billy Kee’s penalty was saved by former Reds keeper Martin Fearon in the 10th minute. Kee’s follow-up hit the post and came out to Brayden Shaw who scrambled the ball home.

A flurry of goals were expected to follow but, despite Stanley hitting the woodwork twice through Kee and Sean McConville, Skemersdale equalised with almost the last move of the game, Rob Brodie heading home their first real chance.

Stanley fielded a strong side which included only one triallist and it left Coleman frustrated at the final whistle.

“You always like to win games and I am disappointed we conceded a soft goal with the last kick of the game,” said the Reds boss.

“We started brightly and played well for the first half hour, we moved the ball about well on a slippy surface and showed a good appetite for game and should have been four or five up.

“Then we got sloppy and I was disappointed with the way we finished the game and how we approached the second half.

“I don’t think we worked them anywhere near like we did in the first half and I think we told ourselves we were tired and we have got to be able to see games out like that.

“No disrespect to Skelmersdale, but we are going to play a lot harder opposition in the coming weeks and we have got to be prepared to see things out.

“If you don’t put teams to the sword when you have the opportunities, then you always run the risk of conceding a goal from a set play and we did.

“We lost our way and that’s something we have to work hard on – it has cost the lads their day off tomorrow.”

Despite some players getting an hour under their belts, Coleman couldn’t pick up any positives from their first pre-season run-out.

“I don’t see any positives out of not winning games especially against lower league opposition,” added Coleman.

“I won’t be taking any positives. You can’t play well for half an hour and then just clock off.

“There was a few harsh words said in the changing rooms – it’s not acceptable. You have got to win games.

“That was a strong side which started and finished the game. Some have got to look at themselves in the mirror and I won’t put up with the kind of performance that we showed for the last hour of the game tonight.”