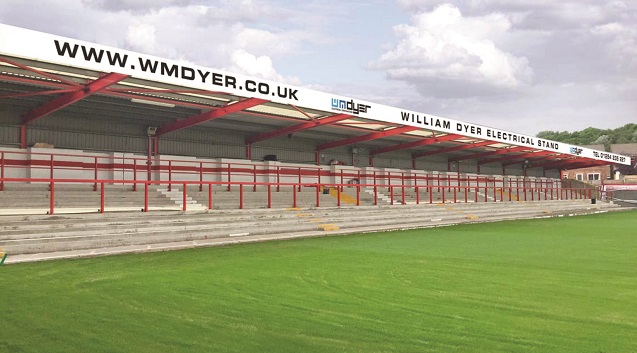 A nationwide electrical contractor is the sponsor of a newly refurbished all-standing terrace at Accrington Stanley.

In a three year deal with Stanley, WM Dyer will see their company logo adorn the refurbished Clayton End stand. Over the summer the club has removed the seating from the stand which is returning to an all-standing terrace for the new season which starts on 6 August.

WM Dyer Electrical relocated to Accrington in late 2014. Having firmly established themselves as a Hyndburn business and boosted the local economy with the creation of a minimum of four jobs per year and investment in purpose-built £500,000 premises, Managing Director William Dyer was looking for another way to demonstrate his commitment to the area.

William Dyer said: “What better way is there to invest in a local area than to support its football team? When a local club does well, it boosts the mood of the area. The community spirit that surrounds Accrington Stanley is fantastic and we’re keen to be a part of that. 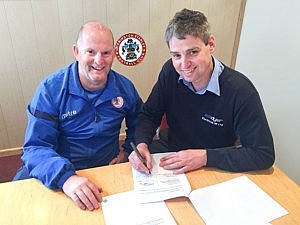 “I’m pleased that the club is engaging with local businesses to offer these sponsorship opportunities. WM Dyer Electrical is proud to be connected with the club and, as a business that has made Accrington its home, we’re here for the long term.”

Although a lifelong Burnley FC supporter, Bill Dyer is now looking forward to taking the younger members of his family to Accrington Stanley home games.

WM Dyer Electrical is recognised as one of the UK’s leading electrical and mechanical installation contractors. With over 20 years’ experience, the company has a nationwide client base. As providers of energy efficient electrical and mechanical installations across all sectors, WM Dyer Electrical helps their clients to make significant energy savings while meeting their green objectives.

William Dyer started his business in Rossendale in 1993. WM Dyer, which today has a turnover of around £5million, relocated to Accrington in the autumn of 2014.

Find out more about electrical  contractor WM Dyer at www.wmdyer.co.uk.

More news about the refurbishment that has taken place at The Wham Stadium over the summer can be found at www.leescarter.com.