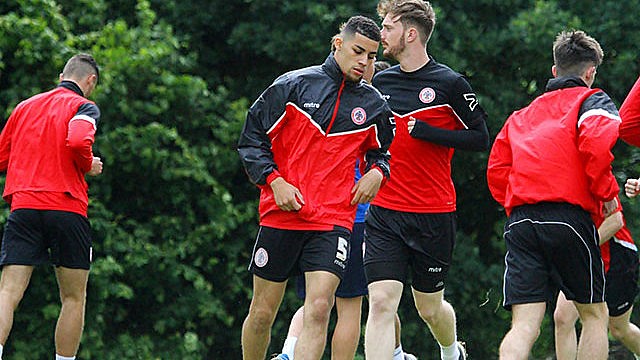 Jones makes up for lost time

New Stanley loanee Callam Jones is looking to put his injury troubles behind him and make his mark at the Wham Stadium.

The defender has joined the Reds from West Brom for the first six months of the season as he looks to taste league football for the first time.

After a year and a half battling back from serious injury the 20-year-old can’t wait to get started.

“When I was out for such a long time I missed the game so much but now I’ve been given the opportunity to play here at a great club in Accrington. It’s something that I’ve really wanted to do and now I can do it,” he explained.

“I tore my anterior cruciate ligament twice, back to back. I’d got over the first one and was in the final stage of the recovery and two weeks before I was back in training I tore it again. That was another nine months but these things happen and I’m looking to make up for lost time now.

“I just need to be playing football. I’ve been playing under 21’s for a while so coming here and playing men’s football will be a new challenge for me. It’ll be a learning curve and I think it will be more physical because it’s about playing with a range of players not just under 21’s. I can’t wait to see how different it’s going to be.”

Jones joined up with the Reds last week and was in time to start pre-season training with his new team mates.

With staff  at the Hawthorns keeping an eye on his progress, the youngster is keen to just do the best he can for his new club.

“For the time being all I’m worried about is doing well for Accrington,” he said. “It’s a case of playing football and enjoying my football. That’s the main thing. From there I can see where it goes.

“It’s good to be here early. If I’d come in and everyone already knew each other and had gelled together that might make it a bit more awkward but there are a lot of lads starting here so that makes it a little bit easier.

“I’d known about the move for a week or so. It had been my intention to go out on loan and fortunately for me Accrington wanted me. As soon as I heard about it I took the chance to come here.

“I did my research before I came here and saw that they were a bit unlucky to finish fourth last season but that’s still impressive and I don’t see why we can’t be successful again this season.”