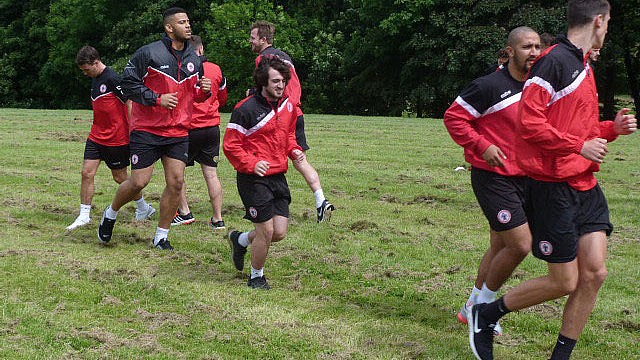 Stanley lost 4-1 in their second pre-season friendly against Conference North side Stalybridge Celtic.

Stanley fell behind to an early goal when Danny Pilkington’s cross was headed home by Adam Farrell to give Liam Watson’s side the early advantage.

It was a competitive clash and Stanley new boy Paddy Lacey came off worse after a challenge and hobbled off to be replaced by another new face, former Burnley youngster Steven Hewitt, with under quarter-of-an-hour gone.

Pilkington’s long range effort was not too far off for Celtic while Shay McCartan winged his way into the area for Stanley but his final shot was easy for keeper Tony McMillan.

John Coleman was playing just one triallist, a right winger, and he did his chances of signing no harm in the 28th minute when he broke from the half-way line and raced forward, finding the bottom corner of the net with a superb solo effort.

However it was Stalybridge who went ahead minutes after the restart when Pilkington’s free kick found Darius Osei at the far post and he tapped the ball over the line.

And Celtic came close to a third when sub Steve Tames hit the post.

Stanley sub Hewitt had a couple of long range efforts while the triallist winger volleyed just over as the game entered its final 20 minutes.

Coleman’s men hunted for the equaliser with a Terry Gornell flick header cleared off the line while, at the other end, Celtic’s Kristian Platt forced a good save out of Parish.

Pilkington made it three with a solo goal which looped over Parish in the 84th minute before, two minutes later, Omar Beckles was judged to have fouled a Celtic player in the area and Aaron Chalmers fired home the fourth from the spot.

Stanley youngsters Nathan Webb and Ross Sykes both got a run out for the Reds.