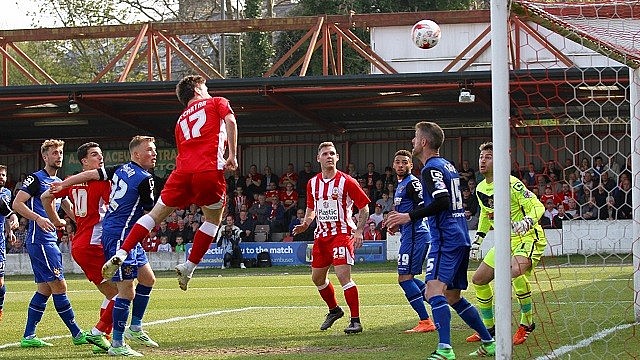 John Coleman says it’s a big season for Shay McCartan after the front man signed a new two-year deal with the Reds.

Northern Ireland Under 21 international McCartan came to Stanley in 2013 and the manager says the expectations are high of the 22-year-old in the new campaign.

“It’s a big year for Shay,” said Coleman. “Josh Windass’s form last year kept Shay from playing the position he wanted to play in and now it’s a big chance for Shay.

“I am confident he will grab the opportunity with both hands. He is capable of scoring a lot of goals this season.”

McCartan scored seven goals in the last campaign where Stanley reached the play-off semi-finals after missing out on automatic promotion on the last day against Stevenage.

McCartan headed against the bar in the dying seconds of the Stevenage game which was agony for the Reds but he also scored some vital goals including a double against Hartlepool and a last ditch winner against then promotion rivals Plymouth.

“People will speak about Shay hitting the bar against Stevenage but the may forget his last minute diving header against Plymouth which was vital at the time. No one misses on purpose and it is swings and roundabouts,” added Coleman.

“Shay is an exciting player and he can get better – he needs to be consistent and hopefully we will see that this season.”