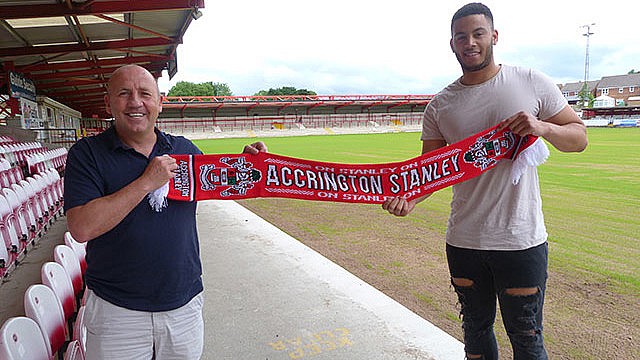 The 26-year-old has agreed a two year contract at the Wham Stadium following his release by the Spireites.

The 6 foot 8 keeper is no stranger to the Reds having played for John Coleman on loan in 2014, playing three times and keeping two clean sheets before a serious ankle injury saw his spell cut short.

“It’s strange to be back but it’s nice,” said Chapman. “I wasn’t here for long but I had a good time while it lasted so it’s nice to be back.

“I knew the goalkeepers from last season had gone on to pastures new and the manager gave me a call asking if I was interested in coming back and I was delighted to.

“It was my first taste of league football and on a personal level I felt good playing so for it to be taken away was hard to take and I felt I had some unfinished business here.”

For John Coleman, Chapman is the first new addition of a considerable influx expected over the coming weeks.

“I think he’s a smashing signing,” explained the manager. “When we had him on loan last time around I couldn’t believe how fortunate we were to have him to be honest.

“It’s a key position and I’m hopeful of bringing another keeper in over the next few days and the aim is to get two good goalkeepers fighting for one place.

“I don’t think any fan who saw him here will be anything other than delighted that he’s back. I know I’m an Accy fan and I’m delighted.”