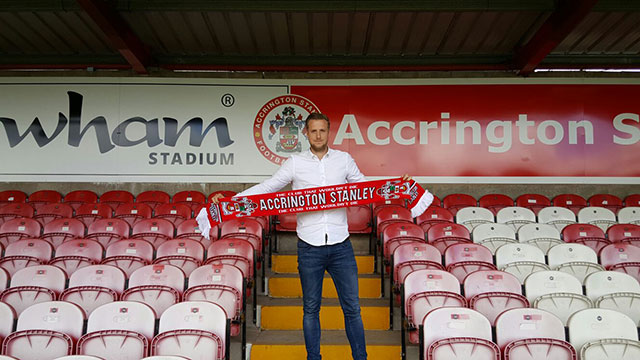 Stanley have secured the signature of a second goalkeeper for the new season, with Elliot Parish arriving at the Wham Stadium.

The former Bristol City and Blackpool man has agreed a one year deal with the option of a further 12 months after leaving Colchester United.

He becomes the fourth signing of the summer and is pleased to be working with manager John Coleman.

“Having met John Coleman, he’s such a straightforward what-you-see-is-what-you-get sort of man,” said the 26-year-old. “He’s the sort of person you just want to work for and after meeting him I just wanted to get started.”

Parish will be competition with fellow new recruit Aaron Chapman to start in goal and is looking forward to the challenge.

“The target for the club has to be that we battle for the number one shirt,” he continued. ”Aaron wants to come out on top and so do I. I’ll be honest, I want to play 50 games this year and having played the second half of the season at Colchester I know the results weren’t great but I think the game time has improved me.”

Coleman is happy to have competition for the number one shirt at this early stage.

“I’ve been saying all summer that I don’t want a number one and a number two,” said the manager. “Elliot and Aaron are coming in at the same time and can fight for the place come the start of the season.

“Elliot has experience playing at a higher level and we think he’s a really good addition to our squad.”