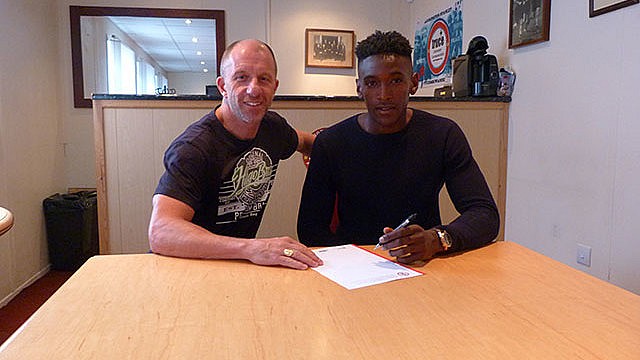 The 24-year-old spent last season in the National League, where he was voted Aldershot Town’s player of the season having played almost 50 games.

The 6 foot 3 centre back has penned a one year deal with the option of a further year at the Wham Stadium.

“It’s very exciting,” said the former Millwall trainee. “I’m looking forward to the challenge of league football, it’s progression to play in the league above. The team achieved so much last season and I’m hoping to be part of another successful season here.

“There’s been speculation but as a footballer you just want to concentrate on your game. You don’t want to get caught up in the hype and the media. I’m happy that it’s now finalised and all done.

“There were other options on the table but I wanted to come here. It was the history of the club and speaking to the management team that sold it to me.”

“It’s been speculated that he should be playing at a higher level,” said Stanley assistant manager Jimmy Bell. “He’s a very aggressive, strong, tall and athletic centre half and we think it’s a big coup for the club.

“We did this last season with Matty Pearson and Tom Davies and both had magnificent seasons having been pretty much untried at league level.

“I’m sure that Omar will fit into our squad and take League Two in his stride. He’ll have experience round him with people like Mark Hughes and the lad is keen an eager to learn and progress. We’ve been really impressed by his attitude. He wants to succeed and if he succeeds then the club will succeed.”