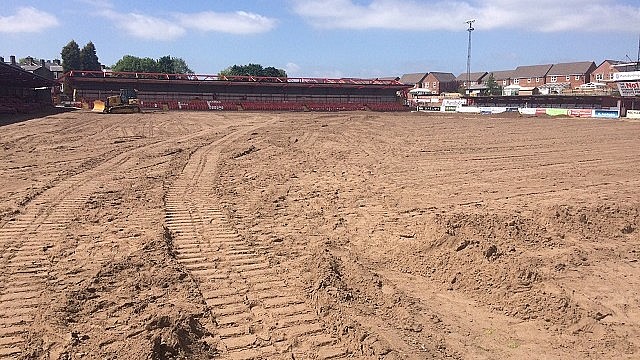 Accrington Stanley will not play any pre-season friendlies at the Wham Stadium this summer due to the extensive work going on at the ground.

The pitch has been dug up, levelled and will be re-seeded while work has gone on in the stands and walkways  to make it a better spectator experience for the fans.

It’s hoped the work on the pitch will lessen the risk of postponements after the Reds had five consecutive home games called off last season due to a waterlogged pitch over December and January.

The club are still awaiting planning permission on the new stand – they have put plans in to Hyndburn Council to replace the Whinney Hill stand.

The Reds have so far agreed three pre-season friendlies – at Barrow, Stalybridge and Skelmersdale – with others in the pipeline, which will be played on their travels.

“This is necessary work,” said Managing Director David Burgess. “It is important we get the pitch right to make it conducive to the way manager John Coleman wants his team to play so we can hopefully build on the success of last season.

“It was also important to carry out work on the stands and the walkways and level these out and make sure that fans coming to the Wham Stadium have a better experience.

“Further work will be carried out on the changing rooms and toilets over the summer.”